This report by the UK’s Food Foundation examines the challenges faced by families in the UK who are unable to access certain public services as a result of the “No Recourse to Public Funds” (NRPF) conditions attached to their immigration status, for example while seeking asylum. Based on interviews with affected families, the study finds that the hostile environment towards immigrants created by UK government policy contributes to a “state of perpetual instability” in relation to people’s ability to access adequate shelter and income - and hence contributing to food insecurity and dietary inequalities.

Interviewees explained that their NRPF status caused stress and uncertainty, with healthy eating not being a priority. Some families rely on food banks - which often serve food from tins rather than fresh food - and have only limited access to cooking facilities, for example because of sharing a kitchen with other families. Some undocumented agricultural workers lived in remote locations, without the time or capacity to shop for their own food and often with little control over the type or quantity of food provided by their employers. Other families who did have semi-secure housing and legal employment nevertheless were working long hours for little money, resulting in little time to prepare meals and insufficient income to afford good quality food. Donated food is not always appropriate to the culture or religious requirements of recipients, and children often refuse to eat foods that are unfamiliar to them. Furthermore, NRPF was previously a barrier to accessing free school meals, although that restriction has recently been removed.

The report also makes some recommendations for organisations working with people who have NRPF, notably providing support tailored to individuals and involving people in decisions about the food they receive, and enabling families to make use of their existing cooking skills, for example by providing cooking equipment. That said, the report stresses that the root cause of the challenges faced by these families is the government’s NRPF policy, which many of the organisations interviewed wanted to see reviewed or abolished altogether. 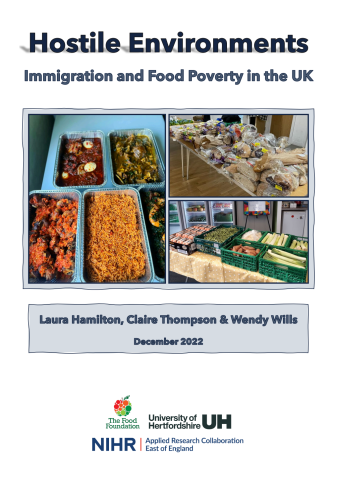