Nearly half of Europeans say they are eating less meat

46% of Europeans say they have reduced their meat intake, according to a survey lead by ProVeg International. The study asked over 7,500 people in ten European countries (Austria, Denmark, France, Germany, Italy, Netherlands, Poland, Romania, Spain, and the UK) about their attitudes towards plant-based foods and their current food consumption patterns.

Survey participants were recruited by Innova Market Insights. Quotas for age and gender were set in all ten countries, to ensure that the participants were representative of the general population. The survey is part of the Smart Protein Project and has received funding from the European Union’s Horizon 2020 research and innovation programme.

The figure below shows the prevalence of each dietary type by country. Only small percentages of respondents are vegans or vegetarians, but a significant minority are self-described flexitarians (i.e. sometimes eat meat but try to reduce their consumption). 37% of people in the sample are flexitarian, vegetarian, or vegan. Read the full report, What consumers want: a survey on European consumer attitudes towards plant-based foods with a focus on flexitarians, here. See also the TABLE explainer What is a healthy sustainable eating pattern? 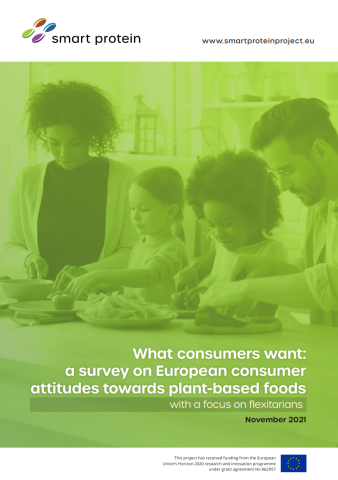