This report from the US-based Breakthrough Institute suggests that increasing the productivity of grazing systems, particularly in lower-income countries, can help to shrink the area of land used as pasture.

While an area of land the size of North America has been converted to pasture since the 1700s, the extent of pasture has fallen since a peak in around 2000. The report attributes this decrease to increased productivity in beef and dairy farming, i.e. producing more from the same area of land. However, the report does not examine what happens to the land no longer used as pasture, e.g. whether it is returned to nature. Nor does it discuss the impacts of increased demand for feed from the pig and poultry sectors.

The report notes that growing populations and economies in some lower-income areas (particularly sub-Saharan Africa) could, in combination with low yields, lead to the re-expansion of pastureland. The report suggests that demand-side mitigation measures, i.e. reducing meat consumption and food waste, are unlikely to offset the projected increase in demand for ruminant products.

However, it argues, improvements in productivity could offset the increase in demand. Such productivity gains might be achieved through better feed, optimised livestock breeds, and improved animal health. For example, it argues that feeding crops such as corn and grain to ruminants can increase productivity through increasing the amount of feed produced per unit area (compared to forage grasses) and through the higher digestibility of such feedstuffs. The report states that feeding crops to livestock typically reduces the net amount of land used. However, it does not discuss the carbon emissions or biodiversity impacts associated with converting land to cropland, or the issue of competition between using crops for feeding people and feeding livestock. 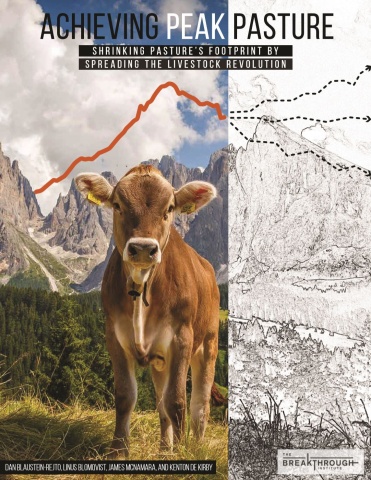