This paper published in PNAS - Proceedings of the National Academy of Sciences of the United States of America - looks at the environmental costs of food production and in particular livestock based food production.  The paper is based on annual 2000–2010 data for land, irrigation water, and fertilizer from the USDA, the Department of the Interior, and the Department of Energy.

Their study considers three feed classes: concentrates, which include crops (corn, soybean, wheat, and other minor crops) along with byproducts, processed roughage (mainly hay and silage), and pasture.  They then calculate the amount of resources (e.g. total land or irrigated water) required for the production of all feed consumed by each edible livestock.

The result show that the animal-based portion of the US diet uses on average 2,000 m2 per person for crops and processed roughage (in total 0.6 million km2 which is equivalent to 40% of all US cropland). The total requirements, including pasture land, amount to 3.7 million km2, equivalent to 40% of the total land area of the United States or 12,000 m2 per person. Feed production in turn requires 45 billion m3 of irrigation water, equal to 27% of the total national irrigation use, or150 m3 per person per year. It also uses 6 million metric tons of Nr fertilizer annually, about half of the national total. Finally, GHG emissions from livestock amount to a total of 0.3 × 1012 kg CO2e which is 5% of total US emissions, or 1.1 t per person per year, equivalent to about 20% of transport sector emissions. Note that as a relative percentage this figure is lower than the estimated contribution of livestock farming to GHG emissions in other countries.  However this reflects the fact that per capita GHG emissions from other sources (eg. transport, housing) in the US are in absolute terms, higher than anywhere else in the world.  Hence the overall absolute national GHG burden, against which livestock emissions are measured as a relative percentage, is very high.

Below: A simplified schematic representation of the information flow in calculating environmental burdens per consumed calorie or gram of protein.

Beef, the least efficient against all four metrics, is the second most popular animal category in the mean US diet, accounting for 7% of all consumed calories. Interestingly, dairy, by far the most popular category, is not more efficient than pork, poultry, or eggs. Even when considering only cropland (not pasture land), beef still uses far more cropland than the other livestock categories, despite the fact that beef production partly relies on land that is largely unfit for any other cultivation form. The five animal categories are markedly dichotomous in terms of the resources needed per consumed calories. Beef is consistently the least resource-efficient of the five animal categories in all four considered metrics. The resource requirements of the remaining four livestock categories are fairly similar.

The authors state that currently available knowledge is incomplete and hampered by reliance on divergent methodologies that afford no general comparison of relative impacts of animal-based products. To overcome these hurdles, the authors highlight their introduction of a methodology that facilitates such a comparison, showing that minimizing beef consumption mitigates the environmental costs of diet most effectively. And although the study reflects current US practices, the authors point out that globalization-driven rapid diffusion of US customs, including dietary customs, into such large and growing economies as China or India, lends a global significance to the analysis.

Livestock production impacts air and water quality, ocean health, and greenhouse gas (GHG) emissions on regional to global scales and it is the largest use of land globally. Quantifying the environmental impacts of the various livestock categories, mostly arising from feed production, is thus a grand challenge of sustainability science. Here, we quantify land, irrigation water, and reactive nitrogen (Nr) impacts due to feed production, and recast published full life cycle GHG emission estimates, for each of the major animal-based categories in the US diet. Our calculations reveal that the environmental costs per consumed calorie of dairy, poultry, pork, and eggs are mutually comparable (to within a factor of 2), but strikingly lower than the impacts of beef. Beef production requires 28, 11, 5, and 6 times more land, irrigation water, GHG, and Nr, respectively, than the average of the other livestock categories. Preliminary analysis of three staple plant foods shows two- to sixfold lower land, GHG, and Nr requirements than those of the nonbeef animal-derived calories, whereas irrigation requirements are comparable. Our analysis is based on the best data currently available, but follow-up studies are necessary to improve parameter estimates and fill remaining knowledge gaps. Data imperfections notwithstanding, the key conclusion—that beef production demands about 1 order of magnitude more resources than alternative livestock categories—is robust under existing uncertainties. The study thus elucidates the multiple environmental benefits of potential, easy-to-implement dietary changes, and highlights the uniquely high resource demands of beef.

You can also find further resources related to sustainability impacts from meat production in our research library here and here. 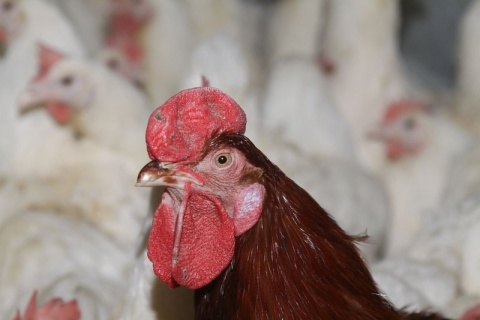