A free trade agreement currently being negotiated between the UK and India could weaken pesticide standards in the UK and could also place UK farmers under pressure from cheaper imports, according to this report from Pesticide Action Network UK, Sustain Alliance and trade expert Dr Emily Lydgate.

The UK currently only imports low levels of food from India, and tariffs are not charged on much of the existing imported food, such as rice, wheat and tea. The UK currently has stronger protections for human and environmental health with regards to pesticides, compared to India. According to this report, these two factors suggest that the Indian trade negotiators may focus on removing non-tariff barriers to trade - such as allowing higher levels of pesticides in imported food.

Furthermore, some food exported from India is rejected by importing countries due to illegally high levels of pesticides, particularly on basmati rice. However, the UK is unlikely to have the capacity to test imported produce for pesticide residues: only four types of crops imported from India, not including basmati rice, are currently automatically tested, and the UK has not significantly invested in expanding its pesticide testing capacities since leaving the European Union.

Another concern is that if the UK agrees to weaken domestic standards in order to facilitate food imports from India, food produced in the UK may no longer meet standards for EU imports if UK farmers were to start using pesticides that are currently banned. Alternatively, if Indian farmers are permitted to use pesticides that remain banned in the UK, UK farmers may be undercut by imported food that could be produced more cheaply than in the absence of those pesticides.

The report sets out recommendations to the UK government for how it should avoid weakening UK pesticide standards. 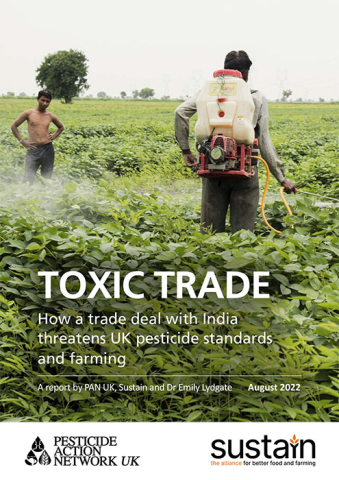