How does the UK media talk about meat and health?

This paper by researchers at Oxford’s Livestock, Environment and People (LEAP) programme studies how meat and health are represented in eight UK news websites. It finds a variety of both pro- and anti-meat narratives, with 50.8% of articles assessed having a neutral stance towards meat, 29.7% being anti-meat and 19.5% being pro-meat.

The eight online news outlets studied were the BBC, Guardian, MailOnline, Sky News, Sun Online, Mirror, BuzzFeed and LAD Bible. These were selected because they are the top outlets accessed by lower-income demographics in the UK, a group of particular interest to the researchers because meat consumption is slightly higher than among higher-income groups. 128 news articles from 2019 were identified as discussing meat’s link to health and nutrition.

The most common pro-meat narratives were that meat is generally healthy or plant-based diets unhealthy; that meat provides important nutrients lacking in plant-based diets; and that meat can relieve health issues such as kidney failure, hormone imbalances or autoimmune conditions.

The articles studied made a range of recommendations (see figure below), including primarily eating less meat (40% of articles), a selection of “other” solutions including avoiding processed meat, eating balanced diets or for the government to tax meat (27%); eating no meat (20%); eating more meat (16%); switching from red to white meat (8%). 23% of articles contained no recommendation. Image: Figure 2, Mroz and Painter. Percentage distribution of solutions, recommendations and advice across all health articles.

Mainstream media play a central role in shaping the ways diet and nutrition are discussed in the public sphere, yet few studies have explored its depictions of the meat-health nexus. Focusing on eight of the most popular news online sites consumed by lower-income groups in the UK—the demographic most likely to eat meat, according to a survey conducted for this study—we carried out content analysis of 128 articles. We found, first, a multiplicity of pro- and anti-meat narratives across all news outlets; second, that the dominant recommendation, found in 40% of our sample, was to eat less or no red meat; and third, that a balanced or neutral sentiment was present in over half of our sample, with a ratio of 3:2 (anti-versus pro-meat) in remaining articles. We found that the editorial leaning of a news outlet was not closely correlated with its overall sentiment towards meat consumption; all were neutral or slightly anti-meat, with the exception of LAD Bible, the only clearly pro-meat outlet. Qualitative analysis uncovered three key themes: the risk of red meat on colorectal cancer, uncertainty around plant-based options, and individual dietary choice. We use case studies guided by these themes to highlight some of the shortcomings of health communication and provide recommendations, with a focus on improved dialogue between journalists and researchers. 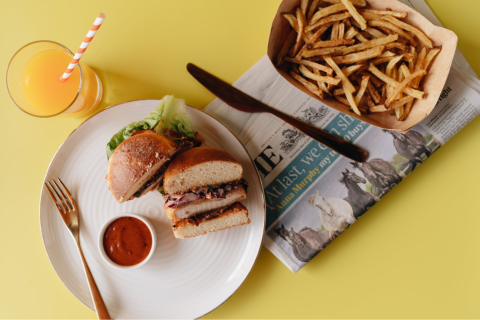