Meat consumption is increasing, especially in the emerging economies. The Chinese government has an increasing interest in making steps towards sustainable livestock production, and the more GHG (greenhouse gas) “efficient” pork and poultry industries have seen substantial progress towards sustainability in the recent past.

Although pig and poultry GHG emissions are much lower in comparison to sheep and cattle (the methane from enteric fermentation from a sheep and pig of similar body size is estimated to be 5.0 and 1.0 kg yr–1 per individual, for example), their large and increasing populations result in considerable overall contributions to the total GHG burden.

China has experienced considerable changes in its booming pork and poultry industries: from 1980 to 2009, the number of slaughtered pigs increased from 198.6 to 645.4 million individuals and egg production increased from 2.6 to 27.4 million tons. China’s pork and poultry industries are expanding; China is now home to over half of the world’s 1 billion pigs, produces 40% of the world’s poultry and eggs and this increasing trend is expected to continue in the future.

This paper examines how pork and poultry production has changed between 1960 and 2010 in China (where pork and poultry are the main sources of meat) and in particular looks at their GHG emission inventories in CO2 equivalents. In this assessment they included methane emissions from enteric fermentation and methane, and nitrous oxide production from manure management. They did not include the emissions as a consequence of land use change. Data was collated from national statistical records and the Livestock Information Network in China and GHG emissions calculations were based on the IPCC (2006). Default factors for these calculations were divided into Northern and Southern China to account for climatic variation in manure management systems, which is something that previous studies have not included.  The authors acknowledge uncertainty in their calculations, which is mainly derived from a ±20% uncertainty in the annual number of pigs or poultry present in each region.

Total CO2e emissions increased from 1960 to 2010 in both pig (11,582 to 55,564 Gg yr–1) and poultry (1,497 to 14,873 Gg yr–1) sectors due to increases in animal numbers. When related to the output efficiency, however, both pig and poultry sectors have seen significantly reduced emissions per kg of product: pork (8.01 to 1.14 kg kg–1), poultry meat (1.19 to 0.37 kg kg–1) and egg (0.47 to 0.33 kg kg–1) in these years (see fig 1). The authors state that this is attributable to the considerable reduction in market age of animals (ie. if animals reach slaughter weight in a shorter period of time, overall lifetime emissions are reduced) and an increase in the number of slaughtered animals compared to stocking animals. This has been achieved through improved production efficiencies aided by the adoption of more productive breeds; these trends are correlated with a decrease in small family farms and an increase in large scale farming.

Figure 1: The CO2e emissions associated with the production of one kg of meat to eggs in China from 1960 to 2010

In terms of emission sources, the majority of CO2e emissions in the pig sector were from methane production from manure management (approximately 62%), and emissions from manure N2O and enteric CH4 accounted for about 21 and 17%, respectively, during the period from 1960 to 2010. The contribution from slaughtered pigs increased considerably from 39 to 53%, whereas the emissions from stocking growing pigs reduced from 67 to 38%, which highlights the impact of changes in management in GHG emission reductions.

In the poultry sector, 81.4% of emissions arose from manure-related N2O emissions and 18% from manure related methane.  The remaining 0.6% of GHG emissions was from enteric methane. The proportion of CO2e emissions arising from hens and breeding poultry increased from 34 to 57%, while the contribution from stocking broilers decreased from 29 to 8%, between 1960 and 2010. Chickens accounted for on average 76% of total poultry emissions, with 15% from duck and 9% from geese.

The authors report that their GHG emissions estimates differ significantly from those of other studies, like Zhou et al., (2007), partially due to differences in which emission sources they included in their calculations (for example, Zhou et al., did not include poultry enteric emissions).

Pig and poultry production in China had experienced considerable changes from 1960 to 2010.  The present study aimed to evaluate the effects of these changes on greenhouse gas emission inventories (expressed as CO2 equivalent) from these two sectors.  The inventories included methane emissions from enteric fermentation and methane and nitrous oxide production from manure management.  The greenhouse gas emissions from these sources in 2010 in pig sector were 17, 62 and 21%, respectively, and that in poultry sector (including chicken, duck, goose and others) were 1, 18 and 81%, respectively.  Total CO2 equivalent increased from 1960 to 2010 in both pig (11 582 to 55 564 Gg yr–1) and poultry (1 497 to 1 4873 Gg yr–1) sectors.  Within poultry sector, emissions from chicken, duck, goose and others accounted for 74, 15, 11 and 0.01% in 2010.  However, during the last 50 years, these emissions continuously reduced when related to production of 1 kg of pork (8.01 to 1.14 kg kg–1) and poultry meat (1.19 to 0.37 kg kg–1) and egg (0.47 to 0.33 kg kg–1), which is mainly associated with the continuous improvement in production efﬁciency in all management systems.  These results provide benchmark information for Chinese authorities to develop appropriate policies and mitigation strategies to reduce greenhouse gas emissions from pig and poultry sectors.

You can read more in the Research Library categories on: Animal issues; Meat, eggs and alternatives as well as the keyword categories: Chicken/poultry; Other meat types; Milk; livestock systems. 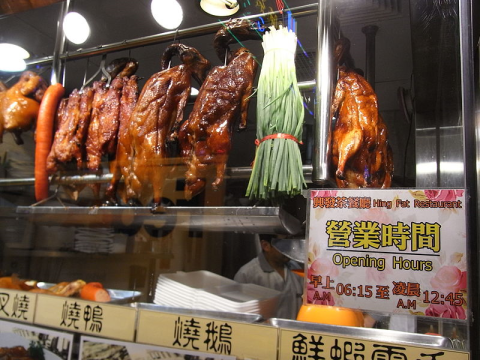