Although Tree says, “There’s no question we should all be eating far less meat, and calls for an end to high-carbon, polluting, unethical, intensive forms of grain-fed meat production are commendable”, she says that unless vegan products come from organic, no-dig systems, then they are contributing to soil destruction, depriving wildlife of habitat and contributing to climate change through ploughing.

George Monbiot, replying, argues that this form of livestock rearing would produce much less food per hectare of land than the production of vegan foods - and that, therefore, a vegan diet could allow some farmland to be returned to its natural form.

Read the article here. See also the Foodsource chapter Focus: the difficult livestock issue. Hannah van Zanten’s blog A role for livestock in a sustainable food system looks at rearing livestock only on feed that can’t be eaten directly by humans, while the FCRN reports Grazed and Confused?, Greedy or needy? Land use and climate impacts of food in 2050 under different livestock futures and Gut feelings and possible tomorrows: (where) does animal farming fit? are also relevant. 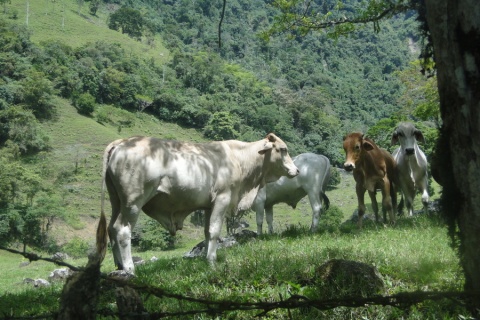