This report from the Food and Agriculture Organization of the United Nations sets out the latest statistics on food security around the world, analyses how government policies are affecting food and agriculture, and sets out options for repurposing government support to improve the affordability of healthy diets. It finds that hunger has continued to worsen, with around 150 million more people affected by hunger in 2021 compared to before the COVID-19 pandemic began.

In 2021, between 702 and 828 million people are estimated to have been affected by hunger, with the prevalence of undernutrition being greatest in Africa (20.2%) and lowest in Northern America and Europe (less than 2.5%).

Global government support for food and agriculture has averaged around US$630 billion per year between 2013 and 2018, mostly targeted at staple foods (e.g. rice, sugar), dairy and other protein-rich foods (e.g. various types of meat). Fruit and vegetable producers receive less support and are even penalised in some low-income countries.

The report argues that subsidies must be redirected towards making healthy diets more affordable. It sets out the effects of several policy scenarios on undernourishment, affordability of healthy diets, poverty, farm income, agricultural production and greenhouse gas emissions from agriculture.

Read the full report, The State of Food Security and Nutrition in the World 2022, here. See also the TABLE explainer What is food security? 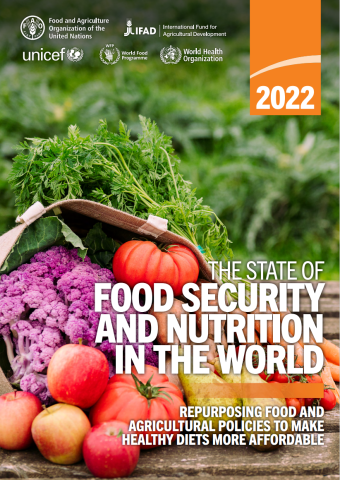