In Sweden two of the largest supermarkets in the country have launched campaigns aimed at creating increased consumer awareness around the environmental impact of meat, encouraging consumers to lower their intake of meat and promoting plant-based alternatives.

The supermarket chain Coop has been the most direct, with a video called “Dear piece of meat- we need to talk” where they describe meat’s high climate and environmental impacts and promote reduced meat consumption. The message is that they want to help create new attitudes towards vegetarian food and help people shift to a more plant-based every-day food that is easy to cook, easy to like for children and healthy.

This work is based on a consumer survey that showed that around 4 out of 10 Swedish families with small children would like to eat more vegetarian food, but that they are unsure of what to cook and if their children will like it. The video is part of a larger campaign ‘The new every-day food’ (Nya vardagsmaten) including a website where users can browse recipes (that are either fully vegetarian or only partially vegetarian) and a podcast with a celebrity chef. Coop is also behind the video “The organic effect” where they follow a Swedish family to see what happens in the body when you switch from eating conventional food to organic.

See the English speaking version of the Coop video and see the original version with English subtitles here.

Initial public reactions to the Coop commercial and campaign have been largely positive, but some argue that the campaign should not warn against all types of meat, emphasising that livestock production in Sweden involves fewer emissions and less antibiotic use than many other European countries, while contributing to a living countryside, open landscapes and biodiversity.

The other supermarket chain ICA, has created a series of youtube films featuring interviews with people in the city of Sweden with the highest meat consumption (the campaign also ranks the top meat-eating cities in the country) about their food preferences and attitudes towards vegetarian foods. A top chef is then brought in to prepare vegetarian meals and portray the consumer’s reactions. ICA mentions environment, animal welfare, health and private economy as the main reasons to eat more vegetarian food.

Both supermarkets chains are involved in the initiative Sustainable food chain (Hållbar livsmedelskedja) a collaboration between a range of different Swedish food companies working for an increased sustainability focus throughout the food chain.

You can find further examples of initiatives from supermarkets in the Research Library in the category Retailing and Industry actions/CSR. 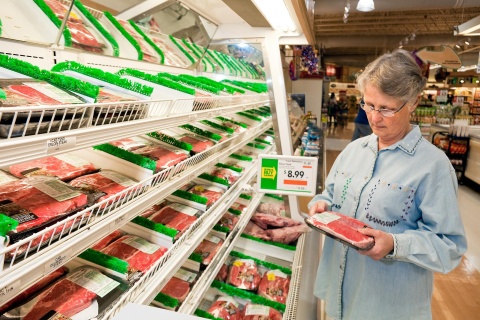