FCRN member Marie Trydeman Knudsen has co-authored this life cycle assessment of organic versus conventional milk production in Western Europe, which highlights the importance of including soil carbon changes, ecotoxicity and biodiversity in environmental assessments.

This paper studies three dairy systems: mixed crop-livestock lowland systems (as found in Denmark), lowland grassland-based systems (as found in UK), and mountainous systems (in Austria). For each, it considers both organic and conventional production. The feed compositions of each of the farming types are shown in the table below.

Life Cycle Assessment was performed with with the functional unit of one kg of milk (corrected for fat and protein content) at the farm gate.

To estimate soil carbon changes, the paper assumed that 9.7% of carbon added to the soil (through above- and below-ground crop residues and manure) is sequestered over a timeframe of 100 years, based on modelling by Petersen et al. (2013), who combined soil carbon modelling (e.g. with C-TOOL or RothC) with the Bern Carbon Cycle model. This approach is based on one year’s addition of carbon to the soil. The paper says “The soil C dynamics and the resulting effect on the atmospheric load of carbon by using the Bern Carbon Cycle model are not dependent on whether the soils has [sic] reached equilibrium or not. Furthermore, since the approach is designed for agricultural LCA's, it is focused on the effect of one crop on soil carbon sequestration – and not dependent on whether the practice will continue.”

The figure below shows the results for a grassland-based system in the UK, per kg of fat and protein corrected milk. The paler dashed line shows conventional (non-organic) production, and the darker line shows organic production. Soil carbon changes are included in the climate change impact category.

In all three systems studied, organic production has greater land use than conventional (by 50% for the mixed and mountainous systems, and by 12% for the grassland-based system). The study does not account for carbon sinks or sources on land that might be used in alternative ways (e.g. rewilding) if the area of farmland required were decreased (e.g. by using conventional instead of organic farming). Similarly, although biodiversity damage is measured relative to natural conditions (since it is expressed as a potentially disappeared fraction of species rather than an absolute number of disappeared organisms), the paper does not account for the levels of biodiversity that might exist on land freed up for alternative uses.

Across the three systems, mineral, fossil and renewable resource depletion for organic milk is on average five times lower than that of conventional milk, mostly due to avoided mineral fertiliser use.

The paper concludes that it is important to include a variety of environmental impact categories beyond (say) climate change, eutrophication and acidification, since the difference between organic and conventional production is particularly marked for resource depletion, biodiversity damage and freshwater ecotoxicity.

Estimates of soil carbon changes, biodiversity and ecotoxicity have often been missing from life cycle assessment based studies of organic dairy products, despite evidence that the impacts of organic and conventional management may differ greatly within these areas. The aim of the present work was therefore to investigate the magnitude of including these impact categories within a comprehensive environmental impact assessment of organic and conventional dairy systems differing in basic production conditions. Three basic systems representative of a range of European approaches to dairy production were selected for the analysis, i.e. (i) low-land mixed crop-livestock systems, (ii) lowland grassland-based systems, (iii) and mountainous systems. As in previous publications, this study showed that when assessing climate change, eutrophication and acidification impact organic milk has similar or slightly lower impact than conventional, although land-use is higher under organic management. Including soil carbon changes reduced the global warming potential by 5–18%, mostly in organic systems with a high share of grass in the ration. The impacts of organic milk production on freshwater ecotoxicity, biodiversity and resource depletion were 2, 33 and 20% of the impacts of conventional management, respectively, across the basic systems considered. The study highlights the importance of including biodiversity, ecotoxicity and soil carbon changes in life cycle assessments when comparing organic and conventional agricultural products. Furthermore, the study shows that including more grass in the ration of dairy cows increases soil carbon sequestration and decreases the negative impact on biodiversity. 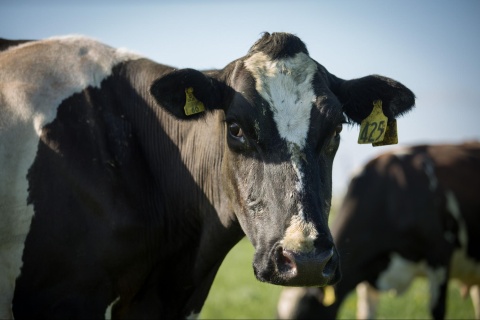