A review of global meat consumption and sustainability

This paper offers a global review of the environmental, economic, social, health and ethical impacts of meat consumption, including trends in consumption over the past few decades. It also explores how the sector can become more sustainable by changing both production and consumption practices.

Since 1961, total global meat consumption has risen over four-fold, driven most strongly by poultry and pork. Increases are driven partly by population growth, and partly by income growth. Per capita consumption in Africa, Asia and particularly Latin America is rising (from a low baseline), while consumption in North America, Oceania and Europe remains high but is plateauing.

The paper interprets the figure below as showing an environmental Kuznets curve - that is, meat consumption rises as lower income countries grow richer, and then declines (slightly) beyond a peak. Since most people currently live in countries with income below the level at which “peak meat” occurs ($36,000 according to data cited by the paper), the authors argue that meat consumption is likely to increase until 2050 driven simply by income and demographic trends - however, environmental limits could constrain this growth. Regarding environmental impacts, the paper considers water use, greenhouse gas emissions, and biodiversity.

With the exception of nuts, most plant-based products have lower water footprints than meat products. For livestock, most water use is incurred in feed production rather than as drinking water. Extensive grazing of ruminants uses a lot of water, but most of this is rainwater that does not result in competition with other uses.

The paper discusses the relative climate impacts of various foods types, and also addresses the debate around GWP100 versus GWP*. See the TABLE explainers Agricultural methane and its role as a greenhouse gas and Methane and the sustainability of ruminant livestock for further details. The paper also presents carbon footprints for food excluding methane emissions, showing that, regardless of how methane is treated in sustainability analyses, animal-source products still tend to have higher carbon footprints per kg than plant-based foods.

On biodiversity, the paper discusses both the negative impacts of agricultural expansion - largely driven by livestock - and the cases in which livestock can contribute positively to on-farm biodiversity.

The paper discusses the importance of meat and milk as sources of protein and micronutrients in many areas with little access to either plant-based alternatives or to other nutrient-rich foods such as fruit and vegetables, which can experience seasonal price swings greater than those experienced by livestock products. The authors note that livestock products can provide nutrients to people who do not have the knowledge of how to plan a balanced plant-based diet, and indeed several studies show that children, adolescents and adults have a lower chance of nutritional deficiencies when meat is included in their diet.

While processed red meat has been linked to increased risk of type 2 diabetes, cardiovascular diseases, dementia and several types of cancer, the same is not the case for unprocessed meats. The paper lists several studies showing positive health impacts of meat consumption, including lower risk of dementia (linked to red meat), lower risk of some cancers (linked to poultry) and lower risk of bone fractures, while exclusion of meat from the diet is associated with higher risk of depression and anxiety. The paper discusses the methodological limitations of the studies cited.

The authors stress the need to find solutions that balance limiting the potentially “disastrous” environmental impacts of growing meat demand, and the important nutritional role that meat can play, particularly in low and middle income countries. They argue that technological solutions - such as feed additives to reduce methane emissions, lab-grown meat, or grazing practices that promote carbon sequestration - are not alone sufficient, and that meat consumption must be reduced to low or moderate levels, particularly in high income countries.

Meat has become a controversial topic in public debates, as it involves multiple sustainability dimensions. Here, we review global meat consumption trends and the various sustainability dimensions involved, including economic, social, environmental, health, and animal welfare issues. Meat has much larger environmental and climate footprints than plant-based foods and can also be associated with negative health effects. Technological options can help to increase the sustainability of meat production, but changes in consumption are required as well. At least in high-income countries, where people consume a lot of meat on average, notable reductions will be important. However, vegetarian lifestyles for all would not necessarily be the best option. Especially in low-income countries, nutritious plant-based foods are not available or affordable year-round. Also, livestock production is an important source of income for many poor households. More research is needed on how to promote technological and behavioral changes while managing sustainability trade-offs. 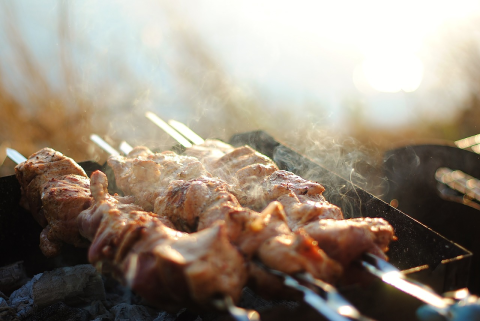