According to the BBC’s coverage of the paper, 5,400 of approximately 42,000 cases of bowel cancer seen annually in the UK could be prevented if people did not consume any processed meat. For comparison, smoking causes approximately 54,000 cases of cancer in the UK each year.

Most of the previous studies on diet and colorectal cancer were based on diets consumed during the 1990s.

We used Cox-regression models to estimate adjusted hazard ratios for colorectal cancer by dietary factors in the UK Biobank study. Men and women aged 40–69 years at recruitment (2006–10) reported their diet on a short food-frequency questionnaire (n = 475 581). Dietary intakes were re-measured in a large sub-sample (n = 175 402) who completed an online 24-hour dietary assessment during follow-up. Trends in risk across the baseline categories were calculated by assigning re-measured intakes to allow for measurement error and changes in intake over time.

During an average of 5.7 years of follow-up, 2609 cases of colorectal cancer occurred. Participants who reported consuming an average of 76 g/day of red and processed meat compared with 21 g/day had a 20% [95% confidence interval (CI): 4–37] higher risk of colorectal cancer. Participants in the highest fifth of intake of fibre from bread and breakfast cereals had a 14% (95% CI: 2–24) lower risk of colorectal cancer. Alcohol was associated with an 8% (95% CI: 4–12) higher risk per 10 g/day higher intake. Fish, poultry, cheese, fruit, vegetables, tea and coffee were not associated with colorectal-cancer risk. 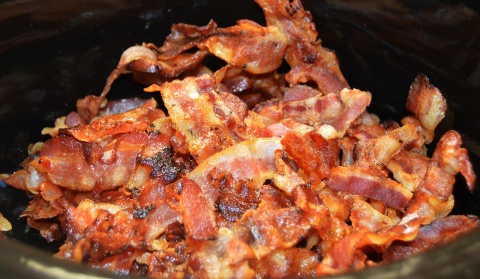