A group of campaigners known as Reboot Food has published a manifesto calling for open-source precision fermentation technology to be used widely to transform the food system away from reliance on animal agriculture and free up land for nature restoration. Precision fermentation technology, which is already used to produce insulin and rennet as well as some new food products, could in theory produce all of the world’s protein on an area of land smaller than Greater London, says the manifesto.

It also sets out ten steps for governments, including investing 2.5% of GDP over ten years to support the transition to precision fermentation, ending subsidies for animal agriculture, limiting patents on food innovation to ten years, and banning the advertising of animal-based foods with a high land and carbon footprint.

The campaign is being run by the European environmental organisation RePlanet. The launch webinar on 16 November 2022 featured Gunhild Stordalen, George Monbiot, Hanna Tuomisto and Sylwia Spurek. A recording will be posted on the RePlanet YouTube channel shortly.

Note that although the campaign has said “We’d rather eat microbes than animals”, precision fermentation products are often (but not always) based on specific proteins, fats or other molecules produced by microbes, rather than on the microbes themselves.

Reactions and media coverage include:

Read more on the campaign website here. The manifesto can be downloaded here (PDF link, 2 pages) and a full report by Reboot Food can be found here (PDF link, 32 pages). See also the TABLE explainer What is ecomodernism? 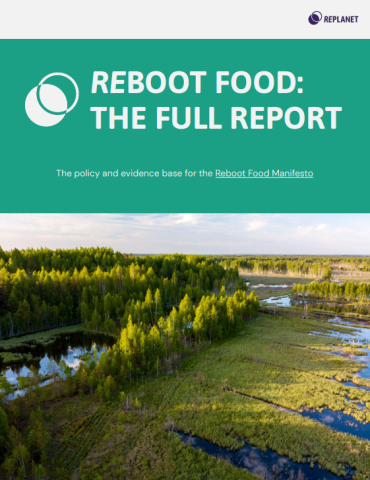