Rates and drivers of mangrove deforestation in Southeast Asia, 2000–2012

In this paper, researchers at the National University of Singapore identify the major land use changes associated with mangrove deforestation in Southeast Asia, with an aim of ultimately facilitating appropriately targeted policy interventions to manage the forests. Over a 12-year period, the researchers quantified LULCC in deforested patches, and classified the replacement land uses (e.g. aquaculture).

The main findings of the study are:

The authors conclude that their detailed results can be used by policy makers to inform conservation that is targeted to address regional drivers of mangrove loss.

The mangrove forests of Southeast Asia are highly biodiverse and provide multiple ecosystem services upon which millions of people depend. Mangroves enhance fisheries and coastal protection, and store among the highest densities of carbon of any ecosystem globally. Mangrove forests have experienced extensive deforestation owing to global demand for commodities, and previous studies have identified the expansion of aquaculture as largely responsible. The proportional conversion of mangroves to different land use types has not been systematically quantified across Southeast Asia, however, particularly in recent years. In this study we apply a combined geographic information system and remote sensing method to quantify the key proximate drivers (i.e., replacement land uses) of mangrove deforestation in Southeast Asia between 2000 and 2012. Mangrove forests were lost at an average rate of 0.18% per year, which is lower than previously published estimates. In total, more than 100,000 ha of mangroves were removed during the study period, with aquaculture accounting for 30% of this total forest change. The rapid expansion of rice agriculture in Myanmar, and the sustained conversion of mangroves to oil palm plantations in Malaysia and Indonesia, are identified as additional increasing and under-recognized threats to mangrove ecosystems. Our study highlights frontiers of mangrove deforestation in the border states of Myanmar, on Borneo, and in Indonesian Papua. To implement policies that conserve mangrove forests across Southeast Asia, it is essential to consider the national and subnational variation in the land uses that follow deforestation.

Read the full text here and for further coverage see here. You can find further resources related to  aquaculture and fisheries, aquaculture specifically, deforestation, land use and land use change and specific resources relating to the Asian and Australasian region in our Research Library.  See also this FCRN publication on efficiency in the context of animal production, which includes discussion of the environmental roles and impacts of aquaculture. 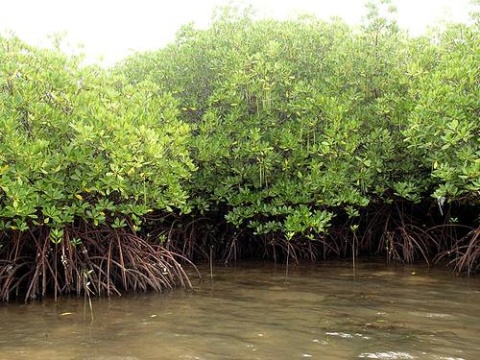