This randomized controlled study looked at how obese Norwegian men were affected by a diet very high in the intake of total and saturated fat, as compared to one high in carbohydrates, while controlling for intake of energy, protein, and polyunsaturated fats and food types.

It has a range of interesting findings, some of which go against common beliefs about saturated fat. Key here is that saturated fat intake, when combined with an otherwise healthy diet, does not appear to have a causal connection risk of metabolic syndrome, fatty liver, or CVD, regardless of the effects on LDL cholesterol.

Objective: We hypothesized that consuming energy primarily from carbohydrate or fat in diets with similar food profiles would differentially affect the ability to reverse visceral adiposity and metabolic syndrome.

Results: Recorded intake of carbohydrate and total and saturated fat in the LFHC and VHFLC groups were 51% and 11% of energy, 29% and 71% of energy, and 12% and 34% of energy, respectively, with no difference in protein and polyunsaturated fatty acids. Mean energy intake decreased by 22% and 14% in the LFHC and VHFLC groups. The diets similarly reduced waist circumference (11–13 cm), abdominal subcutaneous fat mass (1650–1850 cm3), visceral fat mass (1350–1650 cm3), and total body weight (11–12 kg). Both groups improved dyslipidemia, with reduced circulating triglycerides, but showed differential responses in total and low-density lipoprotein cholesterol (decreased in LFHC group only), and high-density lipoprotein cholesterol (increased in VHFLC group only). The groups showed similar reductions in insulin, insulin C-peptide, glycated hemoglobin, and homeostasis model assessment of insulin resistance. Notably, improvements in circulating metabolic markers in the VHFLC group mainly were observed first after 8 wk, in contrast to more acute and gradual effects in the LFHC group.

Conclusions: Consuming energy primarily as carbohydrate or fat for 3 mo did not differentially influence visceral fat and metabolic syndrome in a low-processed, lower-glycemic dietary context. Our data do not support the idea that dietary fat per se promotes ectopic adiposity and cardiometabolic syndrome in humans.

You can find the full paper here.

Science daily has reported on the study too: here. 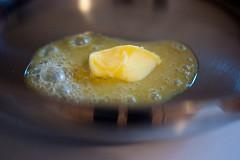