Metal levels in soil, water and food from urban farms

This report from the John Hopkins Center for a Livable Future addresses a common concern among urban farming communities: is food grown in the city safe to eat? Focusing on Baltimore, it finds that soil, water and produce from the urban farms and gardens studied have safe levels of harmful metals, with some rare exceptions. TABLE staff member Matthew Kessler contributed to this project.

All 104 sites surveyed had safe soils levels of arsenic, barium, cadmium and nickel. At the 4% of sites found to have unsafe levels of lead in their soils, the researchers were able to identify the source of contamination or provide guidance. While 52% of sites had high levels of chromium, the researchers found that it was in a non-toxic form and hence concluded that it does not pose a health threat.

00% of sites surveyed had safe levels of arsenic, barium, cadmium, chromium, and nickel in their irrigation water. Three sites had higher levels of lead than is permitted in US drinking water. The authors recommend running municipal water supplies for 10 minutes at the beginning of the growing season and for a few minutes before use after that, to minimise the risk of lead build-up.

Generally, no significant differences were found between the metal levels of urban-grown fruit and vegetables and those bought from grocery stores and farmers markets. The exception was that urban-grown leafy greens had higher lead levels than leafy greens bought elsewhere, but the authors conclude “leafy greens generally had less lead than root vegetables from all sources so we are not concerned about this observation.”

Read the full report, The Safe Urban Harvests Study: An assessment of urban farms and community gardens in Baltimore City, here. See also the TABLE explainer What is food security? 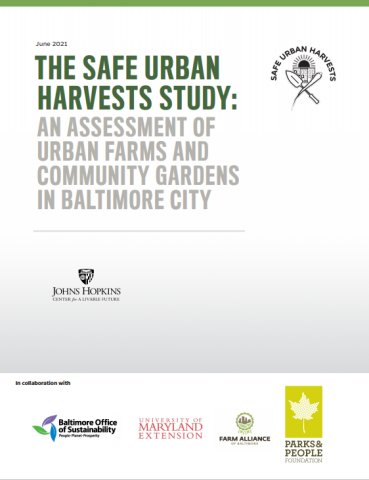