Global impacts of investing in public R&D for US crops

This report from the US think tank The Breakthrough Institute models the effects of publicly-funded agricultural research and development in the United States on crop production, land use, inputs and greenhouse gas emissions. It finds that spending more on public agricultural R&D would increase land use and emissions in the US, but that these increases would be offset by reductions at the global level.

Note that this analysis is limited to crop production and does not include livestock.

In this scenario, US crop productivity (measured by Total Factor Productivity, a ratio of outputs to inputs) is estimated to increase by a further 21% between 2011 and 2050 than it would have increased in the baseline scenario. The “spillover” of technological improvements from the US is also estimated to increase productivity in other regions, for example by 10% in Western Europe and Latin America in this scenario. Image: Global percentage change in key agricultural metrics between 2011 and 2050, for both baseline scenario and 7% annual US agricultural R&D growth relative to baseline, with technological spillovers. Based on Appendix Table 3 of original report. Graph produced by Table.

Global cropland, non-cropland inputs and crop greenhouse gas emissions fall further under the 7% R&D scenario than in the baseline scenario. This happens for two reasons. First, the global spread of technological improvements driven by US R&D spending makes global crop production more efficient. Second, the large increase in crop exports from the US causes global crop prices to drop, such that there is less growth in agricultural production in non-US regions than would otherwise be the case; the US takes a greater share of global crop production than it otherwise would.

Read the full report, Investing in Public R&D for a Competitive and Sustainable US Agriculture, here or here (PDF link). Other relevant items in the Research Library include COVID-19 stimulus through farm conservation programmes, Accelerating economic recovery through agricultural innovation and Economic recovery for rural communities in the US. See also the Table explainer What is sustainable intensification? 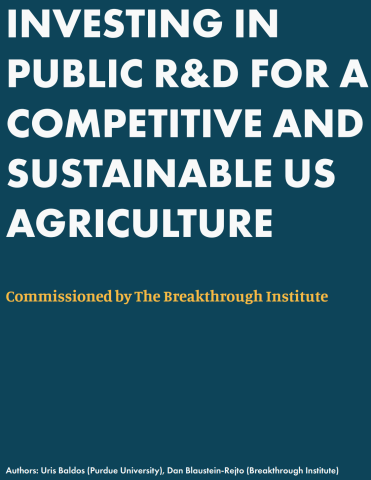