Tracking intended nationally determined contributions (INDCs):  what are the implications for greenhouse gas emissions in 2030? is the title of a policy paper produced by the Grantham Research Institute on Climate Change and the Environment and the ESRC Centre for Climate Change Economics and Policy at London School of Economics and Political Science.  Parties to the UNFCCC agreed to set out their Intended Nationally Determined Contributions (INDCs) at the 20th Conference of the Parties (COP20) in Lima, Peru, in December 2014. The policy paper, which is intended to inform decision-makers in the public, private and third sectors, considers whether the INDCs submitted so far are consistent with the 2°C limit.

It finds that, whilst the INDCs represent progress compared with a ‘business as usual’ global emissions pathway, there is a gap between current ambitions and the actions that need to be taken to limit a rise in global average temperature to no more than 2°C above pre-industrial level.

The INDCs submitted as of 20 July 2015 would lead to annual global emissions in 2030 of 56.9 to 59.1 billion tonnes of carbon dioxide equivalent by 2030. This is much higher than the 36 billion tonnes that has been described as consistent with having a 50 to 66 per cent chance of avoiding a rise in global average temperature of more than 2°C above its pre-industrial level.

The authors also reiterate the findings of a previous paper that countries should focus on four key ways to increase the ambitions of emissions cuts both before and after the Paris summit. Among other things they call for “hard work over the next few months by all countries to find credible ways of achieving bigger emissions reductions which can be included in INDCs to be submitted to the UNFCCC secretariat, and/or achieved through additional efforts by partnerships” and “an intensification of efforts to increase investment and innovation, particularly in relation to the development of cities, energy systems and land use, that could help to close the gap between intentions and the goal before and after 2030”. In addition they highlight a need for “the creation of a mechanism, to be included in the agreement emerging from COP21 in Paris in December 2015, for countries to review their efforts and to find ways of ramping up the ambition of their emissions reductions by 2030 and beyond”.

Read the full policy paper here, see some more background on the research here and for a news article by LSE discussing the findings see here.

Read more about Climate Change Mitigation in our Research Library and see particularly the resources in the keyword categories Climate Policy and Climate Trends/Projections. 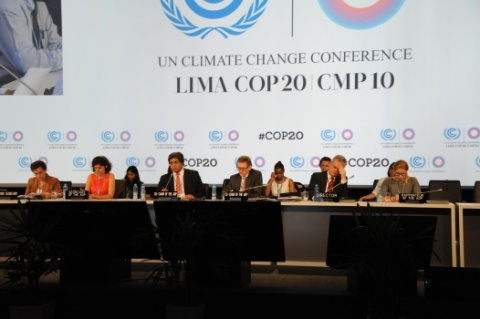