It also looks at whether offshoring of industry in response to low-carbon policies has been or could be a significant contributory factor to reductions in production emissions. This would not have any benefits for the UK’s carbon footprint and therefore global emission reductions, and would not be desirable from a wider economic perspective.

As regards the value of switching to consumption based accounting the report concludes that it remains appropriate to account for carbon budgets on the basis of production emissions given accounting conventions and available policy levers. However, consumption emissions should be monitored to check whether these are falling in line with global action required to achieve the climate objective, or whether further action is required.

The rationale given for this conclusion is as follows:

The CCC also says it will report periodically on consumption emissions as part of the broader reporting to Parliament on progress in reducing emissions.

You can download the report and associated materials here. 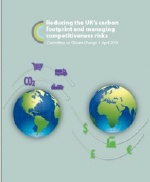