Martin Bowman is the Senior Policy and Campaigns Manager at Feedback, managing Feedback’s campaigns related to food waste and anaerobic digestion. He was previously the UK coordinator for Feedback’s Gleaning Network and worked on its Pig Idea campaign. He is a contributor to Routledge Handbook of Food Waste, a TEDx speaker, and has helped coordinate several This Is Rubbish campaigns. 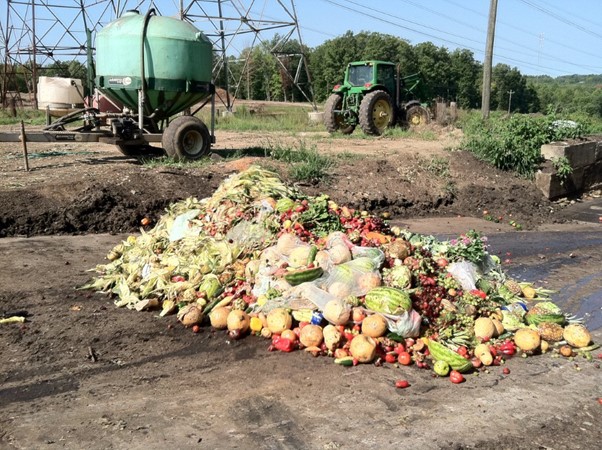 An estimated third of the world’s food is wasted – enough to feed billions of people, accounting for roughly 8% of the world’s emissions, and unnecessarily using 30% of the world’s agricultural area. Food waste is therefore a climate and environmental issue – but it is striking that even in the UK, which is often seen as a world leader on food waste reduction, this connection doesn’t seem to be reflected in food and climate policy.

WWF and UNEP recently demonstrated that most countries do not include food waste measures in their Nationally Determined Contributions to the Paris Agreement. (Specifically, only 11 countries mention food loss while none mention food waste. See the box below for Feedback’s opinion on the distinction between these two categories.) The UK’s NDC mentions both food sustainability and general waste reduction but does not set specific targets for reducing food loss and waste. Despite decades of discussion of food waste reduction, action continues to be largely left to the realm of voluntary measures by business and charitable redistribution of surplus food. I’d like to make the case for why this needs to change to realise the full climate potential of addressing food waste, and why food waste is the ideal candidate for a first step towards integrating effective food and climate policy.

Feedback recently completed a comprehensive Life Cycle Assessment, which modelled the effects of halving UK food waste through ambitious regulation, planting trees on 3 million hectares of spared grassland, and growing peas and potatoes on nearly 1 million hectares of spared cropland. Astonishingly, we found that this would save and offset the equivalent of 11% of the UK’s total domestic emissions, more than the emissions of the UK’s entire domestic agriculture sector – a sector usually considered difficult to decarbonise – as well as have the potential to produce enough potatoes and peas to feed 28% of the UK population. Some of these savings in emissions and land would occur overseas – reducing the emissions associated with UK food imports, so the savings present an unmissable opportunity to decarbonise UK food supply chains. Note, however, that this LCA did not account for the economic viability of this scale of tree planting, or the fact that some of the grassland spared may not be suitable for reforesting if they are natural grassland, as opposed to areas that were deforested at some point in the past. For more on the distinction between types of grassland, see page 20 of the FCRN (now Table) report Grazed and Confused. 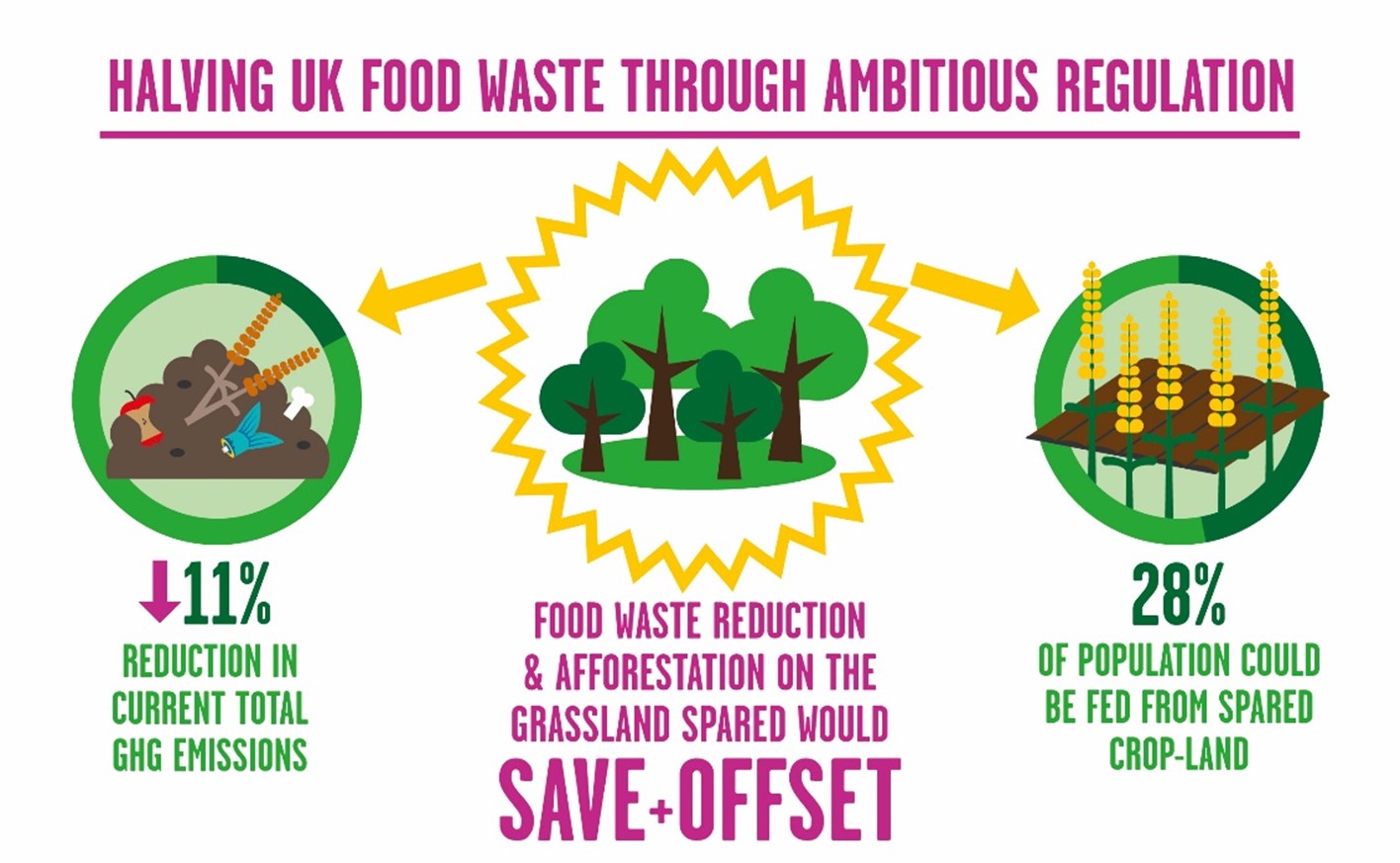 As this analysis lays bare, food waste is not only an emissions problem, but also a land use problem: in simple terms, millions of hectares of land, both in the UK and abroad, are used to grow food that is never eaten. At a time when we need to be reining in agricultural expansion, and freeing up land for carbon dioxide removal and nature restoration, this is indeed worrying. The UK’s failure to protect our natural habitats is stark, with the government’s own self-assessment indicating we are failing to meet 14 out of 20 biodiversity targets agreed ten years’ ago at the Convention on Biological Diversity.

The implications of food waste for agricultural land use also pose important questions for how we think about and measure productivity in a climate- and nature-sensitive way. Feedback has proposed that agricultural policy should prioritise delivering the greatest nutritional value (i.e. the production and consumption of foods which are directly beneficial to human health), for the least environmental impact (on soil health, water use, Greenhouse Gas emissions and local pollution, for example through nitrate fertilisers). In this formulation, food that is grown but not consumed is a direct drain on the UK’s agricultural productivity.

But significantly, these considerable potential savings are not the same as the food waste reductions that can be expected from the UK’s current progress. Feedback modelled a second scenario in which the UK achieves the aims set out by its current voluntary food waste commitments, and found that at best they will achieve only a 4% reduction in the UK’s total emissions, compared with an 11% reduction in the ambitious regulatory scenario mentioned above – even assuming that all of the grassland spared by this is afforested. 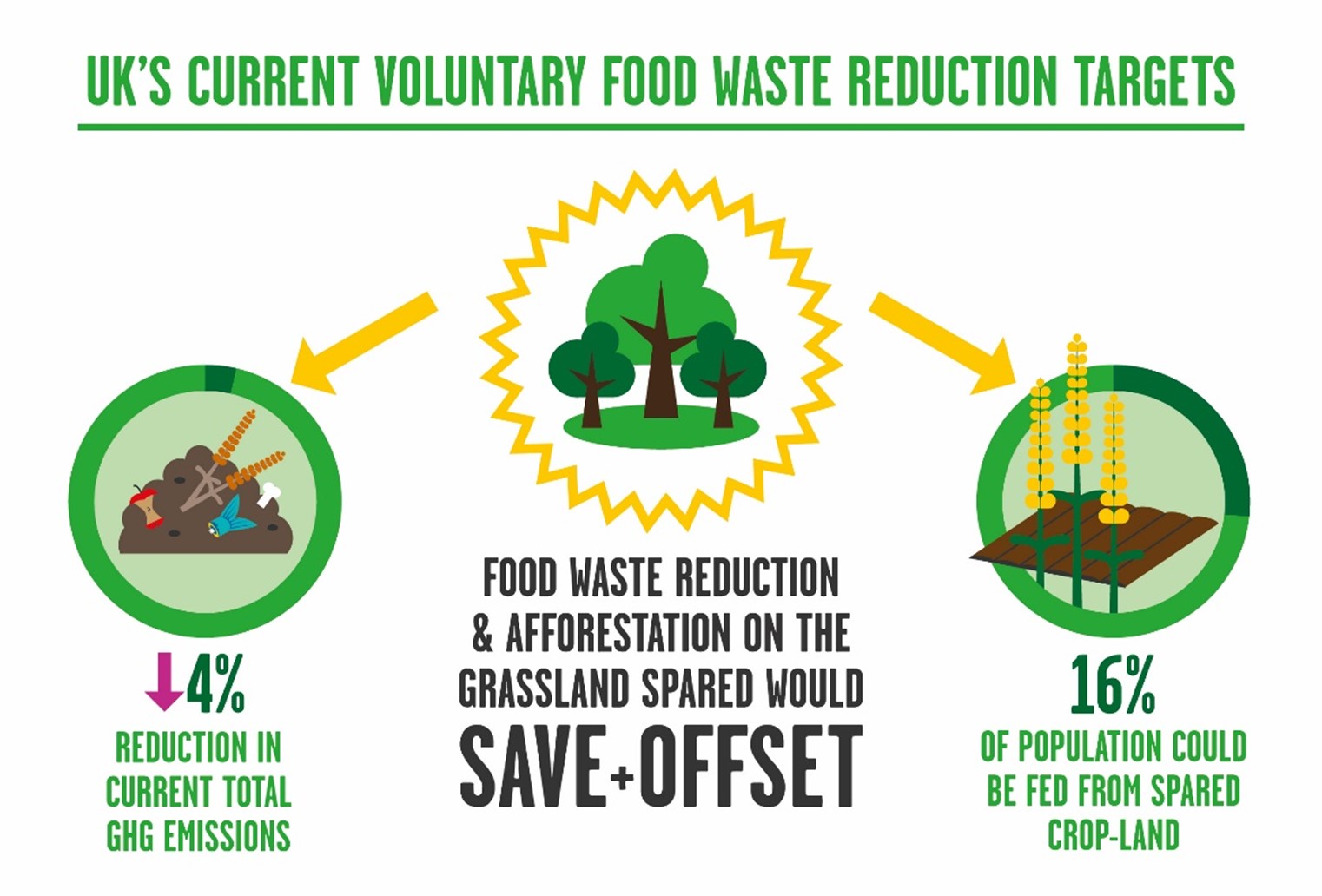 The limits of voluntary action

To date, the UK’s approach to food waste reduction has been primarily business-led, coordinated via a series of voluntary agreements hosted by WRAP. Over the years these have contributed to considerable change: there are now around 261 businesses signed up to the latest iteration of these agreements, the Food Waste Reduction Roadmap. Significantly greater progress has been made than in countries which lack both voluntary agreements and ambitious regulation, especially at household level.

However, as with all approaches, there have been limitations, and there is now a case for scaling action up a level by shifting to a regulation-led, rather than voluntary, approach. Here’s why:

We believe a faster pace of change is possible by turbo-charging food waste reduction efforts through regulation. It is clear that we have reached the limits of what voluntary action can achieve, and the huge potential benefits of faster action on food waste should compel us to raise our ambition. There are some benefits that only state action can unlock – such as tax penalties, regulations and funding of primary production food waste measurement.

The tide seems to be turning with increased desire for regulation. Tesco has taken the unprecedented move of calling on the UK government to make it compulsory for UK businesses to publish their food waste data, and the UK will soon be consulting on whether to introduce mandatory food waste reporting. WRAP, the convenors of the UK’s voluntary food waste agreements, recently said: “Now is the time to get your act in order because mandatory reporting is coming. It’s not a question of if it’s a question of when”. The government has also promised a consultation on legally binding food waste targets.

Here’s our prescription for food waste action proportional to the climate emergency:

No country to date has introduced most of these measures. But this makes it all the more important that we test them out, be that in the UK or elsewhere, to see whether they work and other countries can replicate them. Regulation has yielded huge progress in other spheres – for instance, with the introduction of the plastic bag tax, the number of plastic bags given out in the UK fell by 95% in 5 years, after years of sluggish industry progress. The huge potential benefits of more ambitious food waste reduction for global food security, land use and climate change mean that business as usual will not do – we need to expand our imagination of what is possible.

For more information, see Feedback’s recent Policy Brief: When there’s no waste, there’s a way (to net zero). See also the Table explainer What is food loss and food waste?

To join the conversation, send a message to Table's Google Group (join here).