Brazilian greenhouse gas emissions (GHG) are projected to reach 3.2 gigatonnes (CO2 eq.) by 2020. The government has made a voluntary commitment to reduce these by 40 per cent, and a reduction in deforestation and implementation of beef-related mitigation measures are key components of this commitment. Focusing on the Cerrado core (central Brazilian Savannah), this paper analyses the abatement potential and cost-effectiveness of GHG mitigation measures applicable to livestock production.

The study focuses on the role that intensification measures, particularly pasture restoration and increases in livestock productivity could play in meeting higher demand for beef, while simultaneously reducing emissions. The study does not undertake its own modelling of the market and policy context that influence baseline levels of intensification (e.g. price elasticity of demand, land speculation, law enforcement). Instead, pasture area and demand projections (2006-2030) are taken from a published World Bank reference scenario (Gouvello et al. 2011), which already considers these variables.

Emissions included in the analysis are: CH4 from cattle enteric fermentation, N2O from cattle excreta, N2O direct emissions from N fertilization (pastures and crops for feed production), CO2 from deforestation and CO2 from pasture degradation and land use change from pasture to crops (i.e., reduction in soil organic carbon stocks).  In a baseline projection (a scenario in which no gains in productivity are assumed), beef production in the Cerrado accounts for an average of approximately 122 million tonnes of CO2 eq. per year from 2010 to 2030. The analysis suggests that by implementing cost-effective measures, anticipated baseline emissions trajectories (2006-2030) in the region could be 24 per cent lower. This means that, even allowing for increased demand and increased output, emissions in 2020 could be 11% lower than they are today in 2015. Pasture restoration is the largest contributor to these results, with potential to reduce 27.8 million tonnes of CO2eq per year, where 95% of that reduction is due to avoided deforestation and 5% to increases in soil organic carbon sequestration by grasslands.

The figure below illustrates the abatement potential in a marginal abatement cost schedule of key mitigation measures applicable to beef production in the Cerrado. The abatement potential (x-axis) and cost effectiveness (y-axis) of each measure was calculated as the average values obtained by adopting the measure over the 2006–2030 period.

The authors say that the work can be used to help direct national farm support programs such as the ABC Low Carbon program, a rural credit program offering low interest credit lines to farmers adopting specific mitigation technologies such as pasture restoration. This work has also been used to inform the Ministry of Agriculture on the formulation of the livestock (sector) contribution to Brazil’s Intended Nationally Determined Contributions (INDCs) to be announced at the forthcoming COP 21 meeting. The INDCs target zero deforestation by 2030 and the recovery of 15 million hectares of degraded pastures between 2020 to 2030.

Brazil is one of the first major developing countries to commit to a national greenhouse gas (GHG) emissions target that requires a reduction of between 36.1% and 38.9% relative to baseline emissions by 2020. The country intends to submit agricultural emissions reductions as part of this target, with livestock production identified as offering significant abatement potential. Focusing on the Cerrado core (central Brazilian savannah), this paper investigates the cost-effectiveness of this potential, which involves some consideration of both the private and social costs and benefits (e.g. including avoided deforestation) arising from specific mitigation measures that may form part of Brazil's definition of Nationally Appropriate Mitigation Measures (NAMAs). The analysis used an optimisation model to define abatement costs. A baseline projection suggests that beef production in the region will emit 2.6 Gt CO2e (CO2 equivalent) from 2010 to 2030, corresponding to 9% of national emissions (including energy, transport, waste, livestock and agriculture). By implementing negative-cost measures identified in a marginal abatement cost curve (MACC) by 2030, the 2.6 Gt CO2e could be reduced by around 24%. Pasture restoration, involving avoided deforestation, offers the largest contribution to these results. As the Brazilian Cerrado is seen as a model for transforming other global savannahs, the results offer a significant contribution by identifying alternatives for increasing productivity while minimizing national and global external costs.

See more on related issues such as livestock, Climate change mitigation, GHG impacts and mitigation, deforestation, low carbon development , and you can also browse by resources in the section South America – there are some that specifically discuss Brazil. 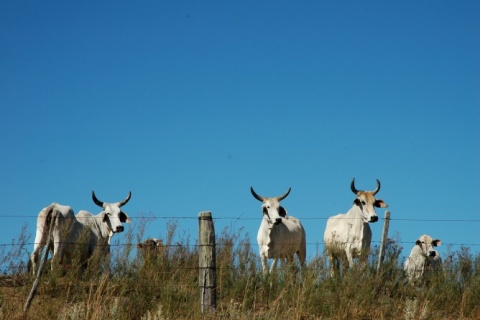