This paper models the resource use of solar-powered single-cell protein (SCP) production and finds that SCP can produce 10 times more protein and double the calories per unit of land, compared to conventional crop production. SCP is any form of edible biomass from microbes such as algae, fungi or bacteria.

Existing edible SCP is typically produced through fermentation of sugar from crops or else methane and methanol from fossil fuels. This paper examines an alternative process, in which renewable electricity from photovoltaics converts atmospheric carbon dioxide and water into a feedstock for the microbes. Bacteria are chosen as the category of microbe, since they can use a wide variety of feedstocks and reach a high protein content (55% to 75% of dry mass).

The figure below shows how the process works. Several pathways were modelled, with the feedstock molecules generated from water and atmospheric carbon dioxide including hydrogen, formate and methanol. In the case of feed production, the microbial biomass is simply dried and consumed whole by animals. In the case of food production for humans, the biomass is processed further to extract all cell components except the protein, before being used as a food supplement. The additional purification step is necessary to remove high concentrations of nucleic acids, which can be digested by farmed animals but not humans.

The calorie and protein yields of SCP production were found to vary significantly according to the specific process used as well as the level of sunlight received. The graphs below compare the yields of various SCP processes to those of the highest-yielding staple crops (note that the figure for the crops is a global average reference point and would in reality also vary with sunlight levels).

Calorie yield per year per unit of land area by photovoltaic SCP can more than double that of sugarbeet crop production in some circumstances, particularly when used as feed rather than as food (because all of the biomass can be used for feed but only a portion can be used for food). The yellow line (sugar beet sucrose SCP) is a reference for SCP production that uses crops as a feedstock - the yield here is consistently lower than for photovoltaic-driven SCP production. The paper gives an example in which one hectare of land, receiving 2000 kWh m−2 y−1 of solar energy, could supply protein for 40 people per year using soybeans, 90 people using SCP grown on sugarbeet, or 520 people using photovoltaic SCP.

The authors point out that further developments in photovoltaics and other stages of the SCP process could improve the overall efficiency.

Preliminary costs estimates provided by the authors put photovoltaic SCP costs at roughly $4 to $5 per kg of protein, which is more expensive than soybean meal ($1 per kg protein), comparable to whey protein ($7 per kg) and pea protein ($5), and cheaper than the mycoprotein on which Quorn is based ($13 per kg) and emerging alternatives such as insects ($40 per kg).

Population growth and changes in dietary patterns place an ever-growing pressure on the environment. Feeding the world within sustainable boundaries therefore requires revolutionising the way we harness natural resources. Microbial biomass can be cultivated to yield protein-rich feed and food supplements, collectively termed single-cell protein (SCP). Yet, we still lack a quantitative comparison between traditional agriculture and photovoltaic-driven SCP systems in terms of land use and energetic efficiency. Here, we analyse the energetic efficiency of harnessing solar energy to produce SCP from air and water. Our model includes photovoltaic electricity generation, direct air capture of carbon dioxide, electrosynthesis of an electron donor and/or carbon source for microbial growth (hydrogen, formate, or methanol), microbial cultivation, and the processing of biomass and proteins. We show that, per unit of land, SCP production can reach an over 10-fold higher protein yield and at least twice the caloric yield compared with any staple crop. Altogether, this quantitative analysis offers an assessment of the future potential of photovoltaic-driven microbial foods to supplement conventional agricultural production and support resource-efficient protein supply on a global scale.

Read the full paper here. See also Comment: Electric food – new sci-fi diet could save our planet, Apocalypse Cow documentary - is lab food the future?, and the TABLE explainer What is sustainable intensification? 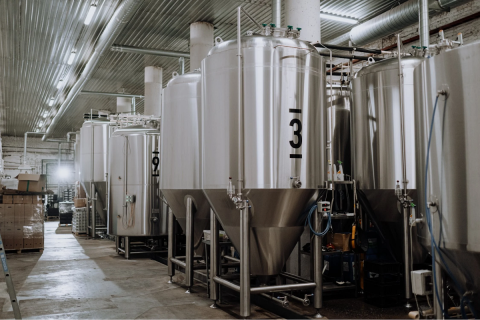