This paper published in Nature shows that neonicotinoids, a commonly used insecticide seed coating can have serious consequences for wild bees. The paper is based on a study of 16 rapeseed fields in the southern part of Sweden; it finds that there are only half as many bees in fields that have been treated with the insecticide as in untreated ones. Insecticides that include neonicotinoid make up a fifth of the whole insecticide market.

Understanding the effects of neonicotinoid insecticides on bees is vital because of reported declines in bee diversity and distribution and the crucial role bees have as pollinators in ecosystems and agriculture. Neonicotinoids are suspected to pose an unacceptable risk to bees, partly because of their systemic uptake in plants, and the European Union has therefore introduced a moratorium on three neonicotinoids as seed coatings in flowering crops that attract bees. The moratorium has been criticized for being based on weak evidence, particularly because effects have mostly been measured on bees that have been artificially fed neonicotinoids. Thus, the key question is how neonicotinoids influence bees, and wild bees in particular, in real-world agricultural landscapes. Here we show that a commonly used insecticide seed coating in a flowering crop can have serious consequences for wild bees. In a study with replicated and matched landscapes, we found that seed coating with Elado, an insecticide containing a combination of the neonicotinoid clothianidin and the non-systemic pyrethroid β-cyfluthrin, applied to oilseed rape seeds, reduced wild bee density, solitary bee nesting, and bumblebee colony growth and reproduction under field conditions. Hence, such insecticidal use can pose a substantial risk to wild bees in agricultural landscapes, and the contribution of pesticides to the global decline of wild bees may have been underestimated. The lack of a significant response in honeybee colonies suggests that reported pesticide effects on honeybees cannot always be extrapolated to wild bees. 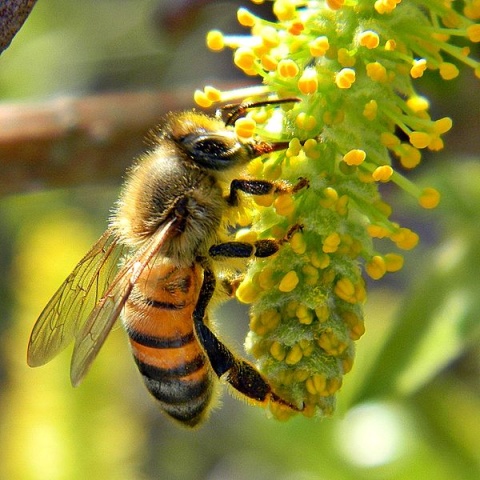