This book sets out the case for considering the wellbeing of animals as part of our responses to pandemics, climate change and other global threats, for example by reducing support for factory farming, deforestation and the wildlife trade.

Jeff Sebo argues that humans have a moral responsibility to include animals in global health and environmental policy. In particular, we should reduce our use of animals as part of our pandemic and climate change mitigation efforts and increase our support for animals as part of our adaptation efforts. Applying and extending frameworks such as One Health and the Green New Deal, Sebo calls for reducing support for factory farming, deforestation, and the wildlife trade; increasing support for humane, healthful, and sustainable alternatives; and considering human and nonhuman needs holistically. Sebo also considers connections with practical issues such as education, employment, social services, and infrastructure, as well as with theoretical issues such as well-being, moral status, political status, and population ethics. In all cases, he shows that these issues are both important and complex, and that we should neither underestimate our responsibilities because of our limitations, nor underestimate our limitations because of our responsibilities.

Both an urgent call to action and a survey of what ethical and effective action requires, Saving Animals, Saving Ourselves is an invaluable resource for scholars, advocates, policy-makers, and anyone interested in what kind of world we should attempt to build and how. 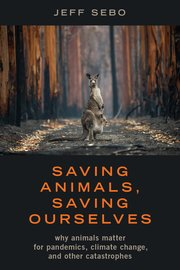