In the presentation Smith sets out the state of global food security and considers how the world will manage to feed itself as the human population grows before stabilizing at about mid-century. He states that some 60% more food than is produced now will be needed by then and somehow, some 75% of that increase will have to come from increases in productivity rather than from increases in land under cultivation. This higher production must be achieved while at the same time reducing poverty and hunger and addressing environmental, social and health concerns argues Smith and in addition, the greater food production will have to be achieved in the face of temperatures 2−4 degrees C warmer than today’s.

The presentation also describes the nutritional divides in the world today, trends in gains in consumption of meat in poor and emerging economies which are greatly outpacing those of the industrialized countries, the important role of very small-scale farmers in developing countries in producing food and the unrecognised competitiveness of these farmers. Smith also describes the huge global trade in livestock and rising demands for meat, milk and eggs in developing countries and focuses much of the attention on global animal health. Further topics include the impacts of livestock disease in Africa and food safety as well as opportunities for improving animal health in developing countries.

Finally Jimmy Smith points to the risks of ignoring pressing animal health issues in the developing world such as lost livelihoods in poor countries, greater global food insecurity and increased risk of human illness in all countries.

More presentations by Jimmy Smith can be found here and relate to issues such as environmental sustainability of livestock systems and the importance of small-scale livestock farms.

The FCRN has reported on a number of articles related to the issues of livestock and increasing demands for meat. See for example our Research Library categories covering ‘Meat’, ’processed meat’ and ‘red meat’. To get a broader spectrum of issues try the ‘consumption’ or ‘diet change’ categories. 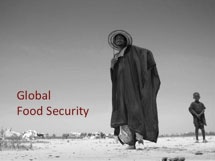