This paper presents two qualitative narratives for possible futures of seafood production: a transition from fisheries towards aquaculture, and the co-existence of both fisheries and aquaculture. Within each narrative, the authors examine what could happen in the presence or absence of regulation.

The paper draws parallels between the drivers influencing the current rapid transition towards aquaculture (dubbed the Blue Revolution) to the drivers that led to the Neolithic Revolution (i.e. the shift from hunter-gathering to farming). The drivers are:

The paper also points out three major differences between the Neolithic Revolution and the current Blue Revolution:

In the paper’s “ubiquitous aquaculture transition” scenario, the role of fisheries may be limited to supporting aquaculture as a source of seed and feed, subsistence, and recreation. If aquaculture grows in an unregulated way, says the paper, then there could be significant negative effects in the form of degradation of coastal ecosystems and the expansion of large, monocultural aquaculture farms with little room for wildlife. On the other hand, appropriate regulation could avoid these negative impacts, for example through spatial planning to minimise conflicts between ocean uses.

In the aquaculture and fisheries coexistence scenario, a lack of coordination between the two could cause conflict and put pressure on ocean resources. On the other hand, systematic planning could make the most of the synergies between the sectors. The paper suggests: science-based targets (e.g. for carrying capacity); mapping the spatial extent of both sectors to avoid interference with, say, critical habitats or productive fishing grounds; acknowledging the contribution of hatcheries to supporting wild catch fisheries; and implementing trade caps on imported aquaculture products.

The Neolithic Revolution began approximately 10,000 years ago and is characterised by the ultimate, nearly complete transition from hunting and gathering to agricultural food production on land. The Neolithic Revolution is thought to have been catalysed by a combination of local population pressure, cultural diffusion, property rights and climate change. We undertake a thought experiment that examines trends in these key hypothesised catalysts of the Neolithic Revolution and patterns of today to explore whether society could be on a path towards another paradigm shift in food production: away from hunting of wild fish towards a transition to mostly fish farming. We find similar environmental and cultural pressures have driven the rapid rise of aquaculture, during a period that has now been coined the Blue Revolution, providing impetus for such a transition in coming decades to centuries (as opposed to millennia). However, we also highlight the interacting and often mutually reinforcing impacts of 1) technological and scientific advancements, 2) environmental awareness and collective action and 3) globalisation and trade influencing the trajectory and momentum of the Blue Revolution from patterns and processes of the Neolithic Revolution. We present two qualitative narratives that broadly fall within two future trajectories of seafood production: 1) a ubiquitous aquaculture transition and 2) commercial aquaculture and fisheries coexistence. Each narrative contains two sub-narratives based on differing management and regulatory strategies for aquaculture and fisheries. This scenarios approach aims to encourage logical, forward thinking, and innovative solutions to complex systems’ dynamics. Scenario-based thought experiments are useful to explore large scale questions, increase the accessibility to a wider readership, and ideally catalyse discussion around proactive governance mechanisms. We argue the future is not fixed and society now has greater foresight and capacity to choose the workable balance between fisheries and aquaculture that supports economic, environmental, cultural and social objectives through combined planning, policies, and management.

Read the full paper here. See also the TABLE explainer Food systems and contributions to other environmental problems and the TABLE blog posts A global movement for localised food and farming: The beginning of agriculture in Europe and To eat fish or not to eat fish? That is the wrong question. 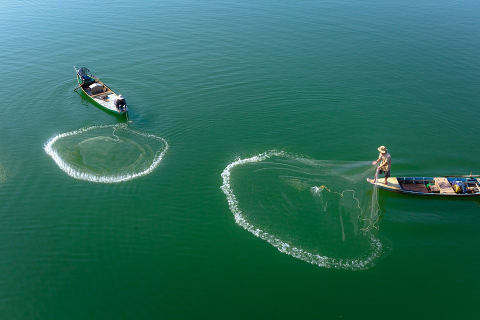