This paper compares detailed nutritional properties of burgers made from a plant-based meat replacement (based on soy) and from grass-fed ground beef. It concludes that, although the macronutrient contents (e.g. protein, fat) of both options are similar enough that consumers reading nutrition labels may view them as nutritionally interchangeable, there are significant differences between the two in the levels of 171 out of 190 metabolites studied.

22 metabolites were found exclusively in the beef samples (e.g. allantoin, an antioxidant; docosahexaenoic acid, an omega-3 essential fatty acid; and squalene, an antibacterial chemical), and 51 were found in higher levels in beef than in the plant-based samples.

The paper notes that some of the metabolites found exclusively or in higher levels in either the beef or the plant-based burgers have important health properties. The authors point out that of 26,000 metabolites commonly found in human food, only 150 are routinely tracked in nutritional databases and only 13 usually appear on nutritional labels. They conclude that the complexity of foodstuffs means it is very difficult to mimic certain food types using other ingredients, and that nutrients often do not provide the same benefits from fortified or supplemental sources as when found in their original whole food source.

The authors note that “flexitarian” diets (replacing some meat with plant-based alternatives) is unlikely to negatively impact people’s access to essential nutrients, and that such a diet has been found to be beneficial for weight control and cholesterol profiles in a randomised controlled trial.

A new generation of plant-based meat alternatives—formulated to mimic the taste and nutritional composition of red meat—have attracted considerable consumer interest, research attention, and media coverage. This has raised questions of whether plant-based meat alternatives represent proper nutritional replacements to animal meat. The goal of our study was to use untargeted metabolomics to provide an in-depth comparison of the metabolite profiles a popular plant-based meat alternative (n = 18) and grass-fed ground beef (n = 18) matched for serving size (113 g) and fat content (14 g). Despite apparent similarities based on Nutrition Facts panels, our metabolomics analysis found that metabolite abundances between the plant-based meat alternative and grass-fed ground beef differed by 90% (171 out of 190 profiled metabolites; false discovery rate adjusted p < 0.05). Several metabolites were found either exclusively (22 metabolites) or in greater quantities in beef (51 metabolites) (all, p < 0.05). Nutrients such as docosahexaenoic acid (ω-3), niacinamide (vitamin B3), glucosamine, hydroxyproline and the anti-oxidants allantoin, anserine, cysteamine, spermine, and squalene were amongst those only found in beef. Several other metabolites were found exclusively (31 metabolites) or in greater quantities (67 metabolites) in the plant-based meat alternative (all, p < 0.05). Ascorbate (vitamin C), phytosterols, and several phenolic anti-oxidants such as loganin, sulfurol, syringic acid, tyrosol, and vanillic acid were amongst those only found in the plant-based meat alternative. Large differences in metabolites within various nutrient classes (e.g., amino acids, dipeptides, vitamins, phenols, tocopherols, and fatty acids) with physiological, anti-inflammatory, and/or immunomodulatory roles indicate that these products should not be viewed as truly nutritionally interchangeable, but could be viewed as complementary in terms of provided nutrients. The new information we provide is important for making informed decisions by consumers and health professionals. It cannot be determined from our data if either source is healthier to consume. 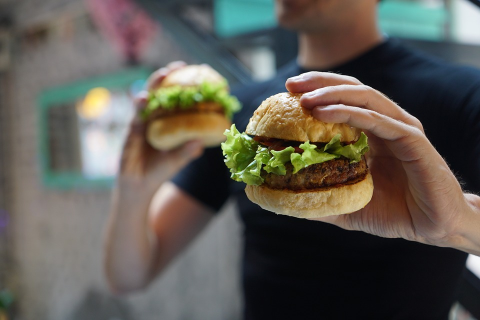