Nearly half of U.S. seafood supply is wasted – new paper quantifies loss from production to consumption

This paper by researchers at the Johns Hopkins Center for a Livable Future (CLF) suggests that as much as 47 percent of the edible U.S. seafood supply is lost each year.  The paper shows that the majority of the waste is produced mainly at the consumer stage. The waste issue adds another layer of pressure on fish stocks and the global seafood supply that are already seriously threatened by overfishing, climate change, pollution, habitat destruction and the use of fish for other purposes besides human consumption.

The food waste issue was analysed by focusing on the amount of seafood lost annually at each stage of the food supply chain and at the consumer level. In total the researchers showed that of the available edible seafood supply of 4.7 billion pounds (2.1 million tonnes) per year (includes domestic and imported products minus any exported products) roughly 2.3 billion pounds (1 million tonnes) is wasted (47 percent). 1.3 billion pounds (600 000 tonnes) are lost at the consumer level accounting for the largest part of the waste, 51 to 63 percent of waste.

Dietary advice to consumers to consume more fish is common all over the world and in the US the 2010 U.S. Dietary Guidelines for Americans recommended increasing seafood consumption to 8 ounces per person per week (approximately 230 grams). Figures from 2014 show however that 80–90% of Americans were not meeting seafood intake recommendations.  Increasing the supply would, according to the researchers, places greater burden on marine ecosystems, and could contribute to food insecurity in low-income countries and coastal communities – making it all the more relevant to look at the amounts of fish wasted.

Importantly, the authors estimate that the lost seafood contains enough protein to fulfil the annual requirements for as many as 10 million men or 12 million women. They also argue that there is enough seafood lost to close 36 percent of the gap between current seafood consumption and the levels recommended by the 2010 U.S. Dietary Guidelines.

This image shows from sea to table to trash how seafood is wasted, 2.3 billion pounds of edible fish is wasted each year in the US. Credit: Johns Hopkins Center for a Livable Future

Based on the average level of seafood consumption in the United States (U.S.), the 2010 Dietary Guidelines for Americans encourages citizens to double their intake to improve the health of their diets. The future availability of seafood, however, is threatened by overfishing, unsustainable seafood farming practices, ocean pollution and acidification, and other factors. The growing global population and advancing ecological threats such as climate change are placing increasing demands and constraints on U.S. and global seafood supplies. Waste reduction has the potential to support increased seafood consumption without further stressing aquatic resources. It is essential to quantify waste levels in order to effectively target and design waste reduction interventions. Accordingly, we used previous multi-country regional research and updated datasets to calculate a country-specific (U.S.) estimate of seafood loss for the years 2009–2013. We estimate that 40–47% of the edible U.S. seafood supply went uneaten in this period. The greatest portions of this loss occurred at the levels of consumers (in and out of home) (51–63% of loss attributed to consumption), bycatch discarded by commercial fishers (16–32%), and in distribution and retail operations (13–16%). Based on conservative estimates, this waste represents 208 billion grams of protein, 1.8 trillion mg of eicosapentaenoic (EPA) and docosahexaenoic (DHA) acids (i.e., omega-3 fatty acids), and 1.1 trillion kilocalories. The seafood that is lost could fill 36% of the gap between current consumption and U.S. Department of Agriculture-recommended levels. As another way of understanding the magnitude of loss, this lost seafood could provide the total yearly target quantity of protein for 10.1 million men or 12.4 million women, EPA + DHA for 20.1 million adults, and calories for 1.5 million adults. The lost nutrition estimates we provide are meant to be illustrative of the issue’s significance and magnitude. While a significant portion of the loss could be prevented or recovered for human consumption, we do not intend to suggest that all of it could or should become food for humans. Bycatch is generally best left in the water; some seafood loss is not culturally acceptable, marketable, nutritious or safe; and a portion of loss is also unavoidable. Instead, we discuss waste prevention strategies involving governments, businesses, and consumers that can be employed to reduce seafood loss and create a more efficient and sustainable seafood system.

We also recommend that you look at this blog-post by Tom Brenna, professor of human nutrition and of chemistry at Cornell University and a member of the 2015 US Dietary Guidelines Advisory Committee. In the post he discusses aquaculture and the sustainability of seafood consumption.

You may also want to take a look at the FCRN’s latest blog-post on aquaculture, the FCRN report on food system transformations in China where one chapter is dedicated to analysing trends in aquaculture production and consumption in China, as well as our briefing paper which summarises this chapter. FCRN has also recently produced a paper discussing efficiency in relation to aquaculture and livestock production which you can read here.

You can find more resources in our Research Library related to fisheries, fish stocks/overfishing, aquaculture, consumption and production trends and lastly dietary guidelines. 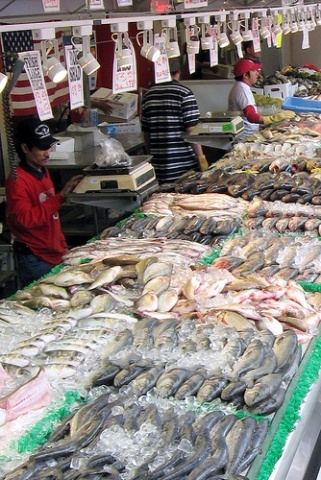