In this study, researchers from the Netherlands and Italy investigate the long-term (past and future) changes in phosphorus (P) budgets in grasslands used for grazing and in connection with croplands. The authors recognise a lack in the literature of studies characterising the P cycle in relation to grasslands and croplands, and - as grass-dependent livestock demand is increasing – they seek to address this lack of understanding.

The authors distinguish between two types of grassland system: an intensive, or “mixed” system, in which grassland for grazing and cropland are coupled, such that crops are grown to provide feed to the livestock, and manure from the livestock is used as fertiliser for the crop; and a pastoral or extensive system, in which there is no distinct cropping and the livestock rely exclusively on available grazing land. Intensive systems, predominantly in developed regions, dominate global meat production, accounting for significantly more than half of meat production of all types, and almost all monogastric production, but pastoral systems, more commonly found in developing countries, cover more than 80% of the global grassland area.

The researchers used a Dynamic Phosphorus Pool Simulator (DPPS) model to simulate P uptake and use in grasslands between 1970 and 2005, and also to estimate the amount of P that will need to be added to future grassland in both intensive and pastoral systems to meet global demand for grass for livestock.

Their key findings are that there are great variations among regions but an overall global negative trend and that at present, more phosphorus is being lost from soils than is being added by farmers:

Abstract: Grasslands provide grass and fodder to sustain the growing need for ruminant meat and milk. Soil nutrients in grasslands are removed through withdrawal in these livestock products and through animal manure that originates from grasslands and is spread in croplands. This leads to loss of soil fertility, because globally most grasslands receive no mineral fertilizer. Here we show that phosphorus (P) inputs (mineral and organic) in global grasslands will have to increase more than fourfold in 2050 relative to 2005 to achieve an anticipated 80% increase in grass production (for milk and meat), while maintaining the soil P status. Combined with requirements for cropland, we estimate that mineral P fertilizer use must double by 2050 to sustain future crop and grassland production. Our findings point to the need to better understand the role of grasslands and their soil P status and their importance for global food security.

You can find related resources in the Research Library categories on Primary production: agriculture, land and keyword categories on soils, phosphorus, land-use and land use change, grassland, fertiliser use. 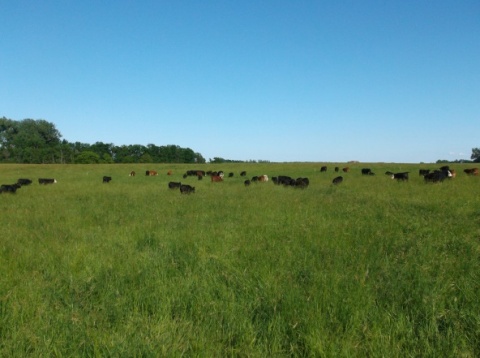