Linking sustainability to the US dietary guidelines

FCRN member Nicole Tichenor Blackstone of Tufts University has recently authored a paper that compares the environmental impacts of three healthy eating patterns recommended in the Dietary Guidelines for Americans. The vegetarian eating pattern had lower impacts than the US-style and Mediterranean-style eating patterns in all six impact categories considered.

The results are shown in the figure below.

In this modelling study done at the University of New Hampshire (Durham, NH, USA), we analysed the healthy US-style (US), healthy Mediterranean-style (MED), and healthy vegetarian (VEG) patterns recommended in the 2015–20 Dietary Guidelines for Americans. Food groups and subgroups consisted of 321 commonly consumed foods, with group composition predetermined by the US Department of Agriculture. We compiled and used multiple datasets to assign environmental burdens to foods, focusing on six impact categories of policy importance: global warming potential, land use, water depletion, freshwater and marine eutrophication, and particulate matter or respiratory organics. We did life cycle impact assessments for each of the three diet patterns and compared the six impact categories between the patterns. We also analysed the proportion contribution of the food groups to each impact category in each of the diet patterns.

The US and MED patterns had similar impacts, except for freshwater eutrophication. Freshwater eutrophication was 31% lower in the US pattern than the MED pattern, primarily due to increased seafood in the MED pattern. All three patterns had similar water depletion impacts, with fruits and vegetables as major contributors. For five of the six impacts, the VEG pattern had 42–84% lower burdens than both the US and MED patterns. Reliance on plant-based protein and eggs in the VEG pattern versus emphasis on animal-based protein in the other patterns was a key driver of differences, as was a lower overall protein foods recommendation in the VEG pattern.

The recommended patterns in the Dietary Guidelines for Americans might have starkly different impacts on the environment and other dimensions of human health beyond nutrition. Given the scale of influence of the Dietary Guidelines for Americans on food systems, incorporating sustainability into their development has the potential to have great benefit in terms of long-term food security.

Read the full paper here. See also the Foodsource resource What can be done to shift eating patterns in healthier, more sustainable directions? and the paper Global land use implications of dietary trends, which claims there is not enough farmland available for everyone to eat the diet recommended by the USDA. 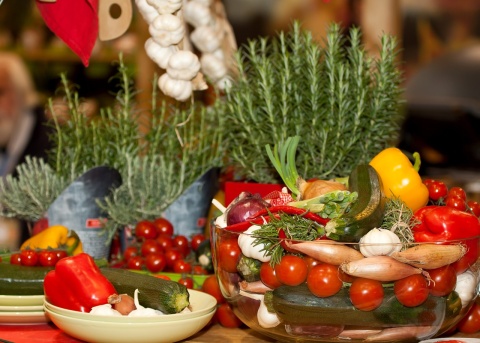