This paper by researchers from the USA, UK and Mexico examines the biodiversity conservation and carbon storage implications of a number of land-use scenarios related to cattle ranching in Yucatán, Mexico.

Keywords
Agricultural biodiversity
Beef
Land use and land use change
Land-sparing vs. land-sharing

From an initial stand-point set out by the authors that the most robust and well-controlled studies on biodiversity conservation support land-sparing over land-sharing, this study aims to determine whether land-sharing would be preferable at a local level in a region with a long history of high disturbance (the argument being that high disturbance over centuries will have selected for a disturbance-tolerant flora and fauna, able to withstand co-existence with agriculture). Additionally the authors aimed to shed some light on the relative impacts of different livestock-production systems, which they identify as a major knowledge gap. With this in mind, the Yucatán region was selected because of its long history of both natural and anthropogenic disturbances, and its current dominance by cattle ranching.

The researchers selected 25 1km2 study sites in the Tizmín District of the Yucatán: 5 non-agricultural forest sites, and 20 agricultural sites, each containing multiple ranches, including breeding and finishing ranches for cattle, and maize and fodder ranches to supply the cattle ranches. Within each site, the researchers collected yield data from the individual ranches using questionnaires and calculated the net production of each site from the interdependent ranch types (fodder → breeding → finishing) using a five-step process. Biodiversity data on species richness and population densities of birds, dung beetles and trees, as well as above-ground carbon stocks were also measured across the sites. They then applied an iterative algorithmic approach to establishing land-use scenarios (classified as land-sharing, land-sparing or intermediate) within each site that would be possible given the combinations of ranch types within the site and which would meet a range of yield targets between 10% and 170% of current production, and estimated the land-use patterns, yields, carbon stocks and biodiversity changes (species richness and population densities) that would arise from each scenario.

The key findings were:

The authors find it surprising that the region’s long history of both natural and human disturbances does not appear to have produced wildlife which can cope well with agriculture. The authors point out that knowledge of how carbon stocks fare under different land management systems is important for tackling climate change. They also point out that reducing demand for animal protein would be another way to reduce pressure on wildlife and carbon stocks, particularly if combined with land-sparing strategies. These benefits of land-sparing could be seen within fairly short timescales, as the forest sites surveyed in this study were quite young (15 to 50 years).

While the authors note that land-sparing could be politically feasible because similar strategies have been proposed by a range of organisations, they note that since intensive farming can be more profitable, it could create a greater incentive for farmers to clear even more land. Policies may therefore have to be introduced to link higher yields to conserving habitats, for example, through bans on some land clearance or subsidies to encourage environmentally conscious practices. While some of these policies already exist in Yucatán, they may have to be made more effective.

The authors suggest some avenues for further research, including accounting for edge effects, population dynamics, ‘wildlife-friendly’ strategies in low-yielding systems, issues associated with high-yielding systems (such as diseases, effluent and water use) and social and economic issues.

Balancing the production of food, particularly meat, with preserving biodiversity and maintaining ecosystem services is a major societal challenge. Research into the contrasting strategies of land sparing and land sharing has suggested that land sparing— combining high-yield agriculture with the protection or restoration of natural habitats on nonfarmed land—will have lower environmental impacts than other strategies. Ecosystems with long histories of habitat disturbance, however, could be resilient to low-yield agriculture and thus fare better under land sharing. Using a wider suite of species (birds, dung beetles and trees) and a wider range of livestock-production systems than previous studies, we investigated the probable impacts of different land- use strategies on biodiversity and aboveground carbon stocks in the Yucatán Peninsula, Mexico—a region with a long history of habitat disturbance. By modelling the production of multiple products from interdependent land uses, we found that land sparing would allow larger estimated populations of most species and larger carbon stocks to persist than would land sharing or any intermediate strategy. This result held across all agricultural production targets despite the history of disturbance and despite species richness in low- and medium-yielding agriculture being not much lower than that in natural habitats. This highlights the importance, in evaluating the biodiversity impacts of land use, of measuring population densities of individual species, rather than simple species richness. The benefits of land sparing for both biodiversity and carbon storage suggest that safeguarding natural habitats for biodiversity protection and carbon storage alongside promoting areas of high-yield cattle production would be desirable. However, delivering such landscapes will probably require the explicit linkage of livestock yield increases with habitat protection or restoration, as well as a deeper understanding of the long-term sustainability of yields, and research into how other societal outcomes vary across land-use strategies.

The full article can be accessed here. See also the FCRN’s report Grazed and Confused and the Foodsource building block What is land use and land use change? 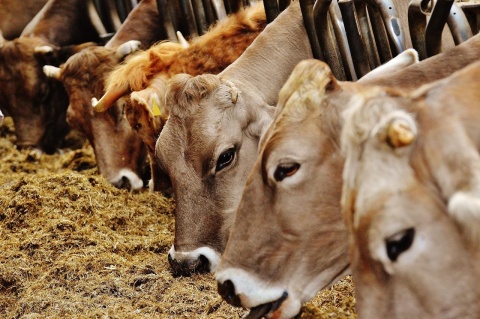