The goal of this study was to determine the maximum amount of food possible to produce on the acquired land, and the authors assume that all land is readily cultivated with the crops reported by the Land Matrix 2013. The paper provides a quantitative assessment amount of food potentially capable of being produced through these large scale acquisitions of land under different yield gap closure scenarios. It focuses on two conservative scenarios where (1) only 50% of the sugarcane and oil palm crops grown are utilized for food production; (2) biofuel crops are replaced with food crops.  They conclude that total closure of the yield gap potentially achieved through large scale agribusiness investments would lead to an increase in food availability: this depending on the diet scenario, could support about 110 to 150 million additional people in addition to those fed today. The paper further states that with the current rates of large scale investments in agriculture (Land Matrix 2013), these ﬁgures are likely to increase over the next few decades.

However, the following points are important to note.  First the study focuses on long term production conditions that in some cases will be reached only a few years after the crops are planted.  Second, and most critically, the study calculates the potential for increasing food supply without considering other aspects that are absolutely crucial to food security, such as access to food (which  includes the ability to afford it, which in turn links to jobs, livelihoods and the factors influencing one’s ability to make a living) and its quality.  The authors recognise this in their concluding discussion and acknowledge that the whole subject of land acquisitions is very contested– see this extract from the conclusion:

“It has been argued that, while the previous land users lose access to the land and its products, these investments will generate new jobs and bring new knowledge and infrastructures that will benefit the local population (Toft 2013). On the one hand, foreign governments and commercial farming companies maintain that the acquired land is often underutilized and investments in modern agricultural techniques could burst its productivity; because the local populations often cannot afford these investments, there is the need for external corporations. On the other hand, it has been shown that investors seldom live up to the expectations, and that in many cases the host communities would have been better off without these large scale investments (Klare 2012). Crucial to this debate is the argument that LSLAs implicitly entail the appropriation of food crops that could be used locally to abate malnourishment in the target countries. Three important points, however, need to be quantified in order to better evaluate these opposing arguments: (i) the amount of food crops that—even without major investments in modern technology—could be produced by the acquired land; (ii) the increase in crop production that could result from the closure of the yield gap in the grabbed land; and (iii) the number of people who could be fed by these crops both under current conditions and at gap closure. This paper has provided the first quantitative assessment of the appropriation of food crops associated with LSLAs under different yield gap closure scenarios.”

They also say this:

“LSLAs may have major implications on global food security for the following reasons: (a) these investments in agriculture could contribute to a global increase in food production if they accelerate the closure of the yield gap in countries where crop yields were stagnating (e.g., Von Braun Meinzen-Dick (2009), Cotula 2009, Deininger and Byerlee 2011, Messerli et al 2013, D’Odorico and Rulli 2013), (b) LSLAs offer great opportunities for profitable investments in agriculture, a strategic and crucial sector in a world with constantly increasing food demand (Tilman et al 2011, Suweis et al 2013). As a result, they may promote the production and transfer of substantial amounts of food commodities

from production regions to distant populations who can afford them; (c) these acquisitions reduce the redundancy of our life supporting system (D’Odorico et al 2010) by enhancing the exploitation of the world’s agricultural land. As a result, less untapped resources are left available to the current and future generations as a safety margin to face adverse conditions due to climate change or land degradation; (d) at the same time, LSLAs would exclude the local population from the access to potentially highly productive agricultural land that, even without major investments, could produce enough food to sustain about 190–235 (minimum number depending on the diet) million people. These numbers raise some concerns because LSLAs often occur in countries with high rates of malnourishment and demographic growth (table S3). While there are some pros in the increase in agricultural production that could result from large scale investments, some measures should be in place to ensure that the benefits are shared with the local populations (D’Odorico and Rulli 2013, Toft 2013, Cotula 2013).”

In other words, while an outcome of LSLA may be increases in yields and hence in food output, LSLA production practices may undermine the environment by reducing the resilience of the land; acquisitions may reduce poor people’s access to productive land which for many is a prerequisite for food security; and – linked to this - the food that is produced may be exported overseas to wealthier populations rather than made available and affordable for local poor people.

The increasing demand for agricultural products and the uncertainty of international food markets has recently drawn the attention of governments and agribusiness firms toward investments in productive agricultural land, mostly in the developing world. The targeted countries are typically located in regions that have remained only marginally utilized because of lack of modern technology. It is expected that in the long run large scale land acquisitions (LSLAs) for commercial farming will bring the technology required to close the existing crops yield gaps. While the extent of the acquired land and the associated appropriation of freshwater resources have been investigated in detail, the amount of food this land can produce and the number of people it could feed still need to be quantified. Here we use a unique dataset of land deals to provide a global quantitative assessment of the rates of crop and food appropriation potentially associated with LSLAs. We show how up to 300–550 million people could be fed by crops grown in the acquired land, should these investments in agriculture improve crop production and close the yield gap. In contrast, about 190–370 million people could be supported by this land without closing of the yield gap. These numbers raise some concern because the food produced in the acquired land is typically exported to other regions, while the target countries exhibit high levels of malnourishment. Conversely, if used for domestic consumption, the crops harvested in the acquired land could ensure food security to the local populations.

The article can be freely downloaded here. You can also read more on Science Daily here.

You can access other resources on the topic of land-acquisitions on our website here and here. For more information on policies and legislation on agriculture and food policy see our specific category on this here.

Note that the International Institute for Environment and Development has undertaken a great deal of analysis on land acquisitions - you can find some of their work here.

We’d be very keen on comments by FCRN members on these issues, particularly from some of our members living and working in Sub Saharan Africa and other developing regions – although we invite comments from all.  If you’d like to write a blog just let us know– alternatively, please post your comments underneath this article.  You will need to be logged in to do so, and if you have forgot your log-in details get in touch and we will sort you out. 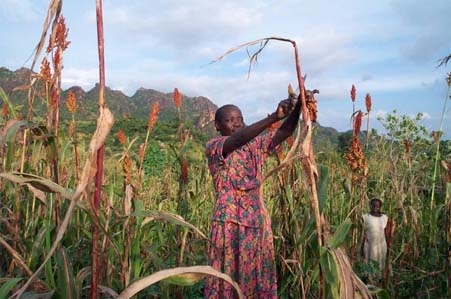