Increasing demand for animal-sourced foods is creating a “trap” where both options for meeting that demand - intensive versus extensive farming methods - each bring their own risks for the emergence and spread of infectious zoonotic diseases, according to this paper. The author sets out recommendations for managing zoonotic disease risks from livestock.

According to the paper, one driver of zoonotic disease emergence is ongoing deforestation for both cattle pasture and feed crop production (e.g. soy), which drives biodiversity loss and exposes human communities to wildlife carrying microbes.

The sustainable intensification of livestock production is often recommended by some experts to reduce the land use and greenhouse gas emissions of livestock production, especially in low and middle income countries. However, argues this paper, the confinement of animals and their wastes in intensive livestock production systems produces other zoonotic disease risks, including transmission of diseases from animal to animal because they are kept in close proximity; the physiological and mental stress (and hence sub-optimal health) that the animals are exposed to; and the routine use of antibiotics to promote growth and prevent infection, leading to the emergence of antibiotic-resistant bacteria.

The paper makes three key recommendations to reduce the zoonotic disease risks related to animal agriculture - illustrated below. These are: Image: Figure 2, Hayek. A three-pillar approach for preventing zoonotic disease emergence and reducing environmental impacts from animal agriculture - centre. Within individual circles and the intersections between the two, limitations of adopting only one or two strategies are described.

Read the full paper here. See also the paper Which livestock models have lower zoonotic disease risks? and the TABLE explainer What is the connection between infectious diseases in humans and livestock? 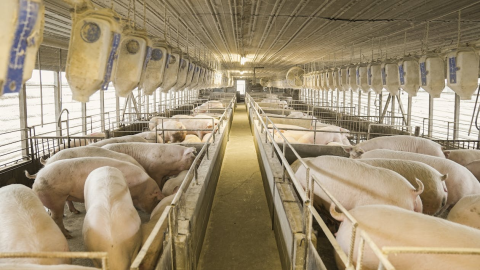