After a 25 year wait for approval, approximately five tons of genetically modified (GM) salmon have been sold in Canada in the last few months. The fish, which contains genes from Chinook salmon and ocean pout, can grow twice as fast as an Atlantic salmon and requires 75% less feed to grow to the same size. These changes can ultimately reduce the carbon footprint of each genetically modified salmon by up to 25 times, the company claims.

These fish have been at the center of a heated debate surrounding labelling of modified products in Canada. They have sparked outrage from several activist groups, and two supermarket chains have said they will no longer stock the fish. However, as the first genetically modified animal to enter the food supply, others are welcoming the change, describing the GM salmon as a breakthrough for sustainability.

The GM fish could in principle help curtail the overfishing of Atlantic salmon. However, the presence of foreign genes in the GM fish might also present a risk to wild populations if interbreeding were to occur. For the moment, the fish remain sterile and are only raised in landlocked tanks but expansion of the breeding of the fish is planned.

Around 30 GM fish species including tilapia and trout have been developed worldwide and are looking for government approval in Canada. 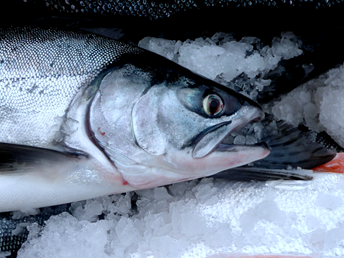