Global Coverage of Agricultural Sustainability Standards, and Their Role in Conserving Biodiversity

This article evaluates the impact of voluntary crop sustainability standards on biodiversity protection. The authors reviewed the 12 major crop standards (such as Organic cropland (IFOAM), Fairtrade and Roundtable on Sustainable Palm Oil), and found that only two of these prohibited all deforestation (Rainforest Alliance/Sustainable Agriculture Network and Proterra).

Using records from 133 countries, they estimated that certified cropland increased by 11% per year from 2000 to 2012, but still only covered 1.1% of global cropland. If the current rate of certification expansion continues, by 2020 the global coverage could reach just 4%.

This article evaluates the impact of voluntary crop sustainability standards on biodiversity protection. The authors reviewed the 12 major crop standards (such as Organic cropland (IFOAM), Fairtrade and Roundtable on Sustainable Palm Oil), and found that only two of these prohibited all deforestation (Rainforest Alliance/Sustainable Agriculture Network and Proterra).

The authors find that crops with the highest levels of certification are coffee, cocoa, tea and palm oil (with over 10% of global production area under certification), and crops with lower coverage include the staple foods such as maize, rice and wheat, which cover greater expanses of land. It is important to note that the overlap between certification schemes is unknown, so there may have been “double counting”: this is considered by a calculation of a range of values, with the minimum value assuming complete overlap between certification schemes - see figure 1.

Countries with the greatest certified crop area include the Dominican Republic (15%), Zambia (14%), both of which are classified as “middle income” by the World Bank. Certification cover was particularly low in the 31 countries classified as low income; Sierra Leone, with 8% cropland certified, was the only of these countries with a certified area above 2%.

This article presents examples of ways in which organisations can work together to help certification progress towards having the greatest positive impact. Here are some examples:

The authors conclude by stating that certification schemes alone will not ensure biodiversity protection, but they are in a unique position to innovate and demonstrate best practice. Current certification coverage is small, but if scaled up and prioritised spatially, it will play an increasingly important role in biodiversity conservation.

Voluntary sustainability standards have increased in uptake over the last decade; here, we explore their potential contribution to biodiversity conservation and other aspects of agricultural sustainability. We reviewed the content of 12 major crop standards and quantified their global coverage. All standards included some provisions for the protection of biodiversity, but we only identified two with criteria that prohibited all deforestation. We found records of certified cropland in 133 countries, and estimated that certified crop area increased by 11% (range 8.8–13.5%) per year from 2000 to 2012, but still only covered 1.1% (range 1.0–1.2%) of global cropland. The crops with the highest levels of certification were heavily traded commodities: coffee, cocoa, tea, and palm oil each had 10% or more of their total global production area certified. Coverage was lower for other crops, including the world's most important staple foods (maize, rice, and wheat). Sustainability standards have considerable potential to contribute to conservation, but there is an ongoing need for better evaluation of how effectively they are implemented. We present examples of ways in which governments, companies, financial institutions, and civil society can work together to scale up and target certification to places where it can have the greatest positive impact. 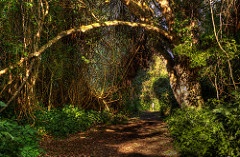