The global availability of food calories for people could increase by 13%, and protein supply could increase by 15%, if livestock were fed more by-products and residues in place of some feed that is edible to humans, specifically cereals, pulses, vegetable oils and whole fish. This study combines data from several sources to trace feed composition throughout the global food system.

In line with previous findings, the study finds that around 15% of the feed eaten by livestock is “food-competing”, i.e. could in theory be used directly as food for people. The proportion varies by livestock type: globally, 49% of aquaculture feed is food-competing; 68% of poultry feed; and 38% of pig feed. For cattle meat and dairy the proportion is only 3-4% since much of global cattle production takes place via extensive grazing systems; however, more than 70% of cattle feed can be food-competing in some industrial finishing systems, particularly those used in North America and Europe. The proportion (across all livestock) also varies geographically, with the lowest being less than 4% in Africa and the highest being almost 20% in North America.

The study assesses four types of by-products: crop residues such as straw; crop processing by-products such as sugar beet pulp; non-ruminant livestock by-products such as blood and bone meal; and fish processing by-products processed into fish meal and oil. Some of these by-products are already commonly used as livestock feed, e.g. cereal bran and oilseed meals, whereas only small proportions of crop residues and livestock by-products are used as feed. Other by-products have other current uses, such as bedding for livestock or biofuels; the paper accounts for the role of residues in maintaining soil quality, but otherwise assumed that all by-products not already used for feed would theoretically be available to be used as feed. (Note that it is debatable whether oilseed meals are a by-product or actually the main economic driver of oilseed production - see Section 3 of Soy: food, feed, and land use change for further discussion).

To calculate the extent to which livestock and aquaculture feed could incorporate these by-products, the authors accounted for the nutritional requirements of livestock types, regulations around using animal by-products as feed, the regional availability of each type of by-product, and the estimated rate of feed replacement that could be implemented without a loss in livestock productivity - except for cattle, where productivity impacts are unavoidable and for which the authors therefore (in one scenario) take into account the lower meat and dairy production that would occur as a result of including crop residues in the feed. These limitations would mean that not all available by-products could actually be used as feed, and hence that some proportion of the by-products would remain available for other non-feed uses (see Figure 4 of the original paper and also the Discussion section for further details).

Around 12% of global food-competing feeds could be replaced with selected by-products without impacting animal productivity; or around 27% if some decrease in animal productivity is accepted. The resulting increase in food calories for people, in the form of edible crops or fish that would then be available as food instead of being used as feed, would be 6% in the first case and 13% in the second; for protein, supply would increase by 9% in the first case, or 15% in the second. For full results see Table 1 of the paper.

Many livestock and aquaculture feeds compete for resources with food production. Increasing the use of food system by-products and residues as feed could reduce this competition. We gathered data on global food system material flows for crop, livestock and aquaculture production, focusing on feed use and the availability of by-products and residues. We then analysed the potential of replacing food-competing feedstuff—here cereals, whole fish, vegetable oils and pulses that account for 15% of total feed use—with food system by-products and residues. Considering the nutritional requirements of food-producing animals, including farmed aquatic species, this replacement could increase the current global food supply by up to 13% (10–16%) in terms of kcal and 15% (12–19%) in terms of protein content. Increasing the use of food system by-products as feed has considerable potential, particularly when combined with other measures, in the much-needed transition towards circular food systems. 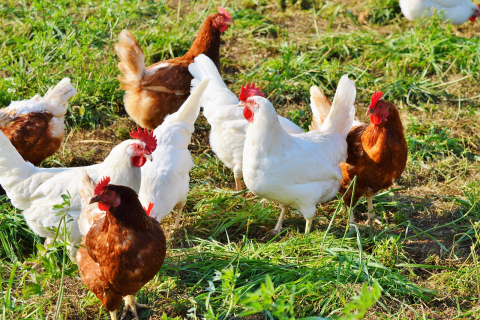