Eating like there's no tomorrow: Public awareness of the environmental impact of food and reluctance to eat less meat as part of a sustainable diet

This paper looks at public awareness of the environmental impacts of meat and attitudes to reducing meat consumption. The study, carried out in Scotland, was based on focus group discussions and individual interviews and tried to understand the cultural and social values associated with eating meat. It found a lack of awareness of the association between meat consumption and climate change, and suggested that individual dietary change will be difficult to achieve without addressing these values and beliefs.

The lack of awareness was shown in perceptions of personal meat consumption playing a minimal role in the global context of climate change, and resistance to the idea of reducing personal meat consumption. One important finding was that for many, changing non-food related behaviours seemed more acceptable and was perceived as a greater priority for climate mitigation.

Even when the study participants were presented with evidence on links between meat consumption and climate change there was a general resistance to the idea of reducing consumption. Meat plays a significant role in the diet of many people, and is associated with pleasure as well as various personal and social values.  Three framings were often used to describe this: the importance of the perceived traditional role of meat in the diet (e.g. a proper meal has to include meat, it is part of a healthy diet, meat fills you up); the belief that human beings should eat meat (e.g. humans have always eaten meat, it is part of our staple diet) and the influence of external social pressures (e.g. others in the household are unwilling to eat less meat, not wanting to be seen as different from peers).  Importantly, many subjects in the study argued that they were sceptical of the scientific evidence since they felt that dietary advice was constantly changing – this, as the authors point out, is a view that is exacerbated by media reporting.

The conclusions drawn about feasible and effective policy interventions are as follows:  “Integrating social dimensions of dietary habits with the objective health, environmental and economic goals provides an opportunity to develop more realistic policy interventions that reflect the complex, subjective lived experiences of individuals and society. Messaging around sustainable diets to eat less meat may be met with resistance among the general public and given a degree of scepticism around dietary messages a staged approach may be more effective in changing dietary habits in the long term.”

Reducing meat consumption is central to many of the scientific debates on healthy, sustainable diets because of the high environmental impact of meat production. Missing from these debates are the public perspectives about eating less meat and consideration of cultural and social values associated with meat.  The aim of this study was to explore public awareness of the environmental impact of food and their willingness to reduce meat consumption. Twelve focus groups and four individual interviews were conducted with adults from a range of socio-economic groups living in both rural and urban settings in Scotland. Public understanding of the link between food, environment and climate change was explored, with a focus on meat and attitudes towards reducing meat consumption. Data were transcribed and analysed thematically. Three dominant themes emerged: a lack of awareness of the association between meat consumption and climate change, perceptions of personal meat consumption playing a minimal role in the global context of climate change, and resistance to the idea of reducing personal meat consumption. People associated eating meat with pleasure, and described social, personal and cultural values around eating meat. Some people felt they did not need to eat less meat because they had already reduced their consumption or that they only ate small quantities. Scepticism of scientific evidence linking meat and climate change was common. Changing non-food related behaviours was viewed as more acceptable and a greater priority for climate change mitigation. The study highlights the role meat plays in the diet for many people, beyond nutritional needs. If healthy, sustainable dietary habits are to be achieved, cultural, social and personal values around eating meat must be integrated into the development of future dietary recommendations.

Macdiarmid, J. I., Douglas, F., Campbell, J. (2016). Eating like there is no tomorrow: Public awareness of the environmental impact of food and reluctance to eat less meat as part of a sustainable diet, Appetite 96 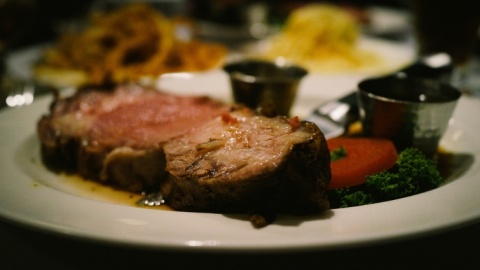