The new method uses an alternative functional unit that is based on a nutrient quality index (NQI). Environmental impacts such as global warming potential (GWP) are frequently expressed as impacts per kg of food; with the new functional unit, the impacts per kg are further divided by the NQI, creating an “NQI-adjusted GWP/kg”.

In this case, the NQI is calculated with reference to the amount of several ‘healthy’ (e.g. protein) and ‘unhealthy’ (added sugar, salt and saturated fat) nutrients in each food type. The NQI is increased for each beneficial nutrient contained in a food and decreased for each ‘unhealthy’ nutrient, with the score also depending on the maximum or minimum recommended intakes for those nutrients, and the level of intake of each nutrient in the overall diet. NQIs can be negative if the food makes an overall negative contribution to health (in the context of the overall diet).

Since overall diets vary between people and places, the paper illustrates its dietary-dependent NQI using both the average Swedish diet (based on a dietary survey) and an ‘unhealthy’ diet rich in fat, sugar and salt. The carbon footprints calculated using the dietary-dependent NQI as a functional unit were different depending on the diet.

For example, a high-fat spread has a high carbon footprint (using the novel functional unit) in the unhealthy diet context because it makes a low but net positive contribution to beneficial nutrient supply in the diet. This is because the beneficial nutrients in the spread (e.g. vitamin A) are not supplied in great amounts by the rest of the diet, while the additional harm caused by the saturated fat and salt in the spread is low since the rest of the diet is already high in fat and salt. The carbon footprint relative to the (low but positive) beneficial nutritional value is therefore high.

However, the same spread has a negative carbon footprint in the context of the average Swedish diet. The authors explain that the negative carbon footprint does not mean that producing the product reduces climate change. Rather, it means that the spread makes a negative contribution to beneficial nutrient supply in the context of the average Swedish diet. This is because the beneficial nutrients in the spread are likely already supplied by other items in the diet, so the spread does not add much benefit relative to the harm done by its salt and saturated fat content (which is high relative to the rest of the diet).

Although food production is a main driver of environmental pressure and resource use globally, food delivers critical nutrition to humans. In life cycle assessment (LCA) of foods, the dominant functional unit is mass, despite the ISO requirement that the LCA unit should reflect the actual function. Studies have used various dietary quality scores in environmental assessments of foods, but the consideration of the dietary context is largely missing. The main function, i.e., nutrient supply, is complex since the nutritional value of a food item depends on its dietary context. Moreover, overall nutritional value is a combination of multiple nutrients.

The aim was to combine scientific knowledge from the fields of nutrition and LCA to generate a basis for further research. The long-term aim was to help develop methods to support sustainability-based planning and decision making by food chain stakeholders.

The results, calculated using bread as the reference, indicated that in both dietary contexts apples, tomatoes, and hard cheese had lower NQIadjusted GWPs compared to when GWPs were calculated using mass as the functional unit. Milk's NQI-adjusted and mass-calculated GWPs differed little, while the chicken fillet GWPs were the same in the unhealthy diet and performed better in the average diet. The NRF9.3-adjusted GWPs differed from the NQI-adjusted ones for all analysed foods. The main conclusions were: 1) considering nutritional value in the LCA of foods improves our understanding of how the environmental impacts and nutritional functions of food are related; 2) the environmental performance of different products varies with dietary context; and 3) application of the NQI could help industry, authorities, and consumers improve products and diets. 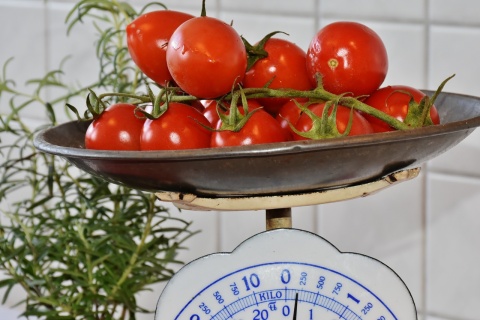