In this study, researchers contrast values and psychological associations and underpinnings of vegetarianism across cultural contexts.  The paper focuses on different perceptions among vegetarians and omnivores with regards to the impact of their daily food choices on the environment and animal welfare, universalistic motives and beliefs that eating meat is polluting. The study analyzes vegetarianism in USA and India and concludes that in USA the primary concerns are universalism, animal and environmental welfare while in India purity, pollution, authority, and tradition are primary concerns.

A growing body of research has shown that Western vegetarians report more concern for animal welfare and environmental sustainability, and endorse more liberal values than do Western omnivores. However, despite the prevalence of Indian vegetarianism, its psychological associations and underpinnings remain largely unexamined. In Study 1, we find that Euro-American vegetarians are more concerned than omnivores with the impact of their daily food choices on the environment and animal welfare, show more concern for general animal welfare, and endorse universalistic values more, yet among Indian participants, these differences are not significant. In Study 2, we show that Indian vegetarians more strongly endorse the belief that eating meat is polluting, and show a heightened concern for the conservative ethics of Purity, Authority, and Ingroup relative to their omnivorous peers, whereas these differences are largely absent among Euro-Canadians and Euro-Americans.

To read more, go to the online journal page here. 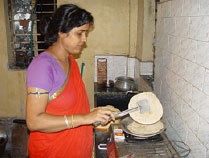