This paper examines the climate commitments of the world’s 35 largest meat and dairy companies - summarised in this table - which together produce around 15% of all greenhouse gas emissions from animal agriculture. It also compares the companies’ projected future emissions to the Paris climate commitments of the country in which each company is headquartered (while noting that the Paris Agreement does not view climate responsibility in these terms), and traces the political influence of the 10 largest US meat and dairy companies.

The research found that there are large discrepancies between the emissions reporting practices of the companies studied. For example, Danish Crown reports that >90% of its emissions result from the production stage of its supply chain, while JBS does not report on scope 3 emissions, does not mention land-use changes in its definition of scope 3 emissions, and states that it has “no responsibility or indirect responsibility” over both scope 2 (purchased energy) and scope 3 emissions. Four companies - Danone, Dairy Farmers of America, Danish Crown, and Nestlé - have at the time of writing set a net-zero emissions target (by 2050, in the case of Danone).

For most of the companies studied, their projected global emissions by 2030 remain less than 10% of their headquarter country’s Nationally Determined Contribution (NDC) under the Paris Climate Agreement, assuming business-as-usual growth in meat and dairy production. However, two companies would each take up more than 100% of their headquarter country’s NDC by 2030: Fonterra in New Zealand and Nestlé in Switzerland. In Denmark, Arla and Danish Crown together would exceed the NDC. The purpose of this comparison, say the authors, is to examine the complex nature of assigning responsibility for emissions at the company or country level.

The 10 US companies studied have all contributed to research that minimises the link between animal agriculture and climate change, says the paper. Four have made statements that link climate change regulation to potential damage to their profitability. Nine have spent at least $600,000 on lobbying activities since 2000, with five spending over $14 million each. Eight have “consistently lobbied both Congress and the EPA directly on environmental and climate-related issues”.

Our view of responsibility for climate change has expanded to include the actions of firms, particularly fossil fuel producers. Yet analysis of animal agriculture’s role in climate change—estimated as 14.5% of anthropogenic greenhouse gas emissions—has mainly focused on the sector as a whole. Here we examine the world’s 35 largest meat and dairy companies for their commitments to mitigating climate change and find four companies that have made an explicit commitment to net-zero emissions by 2050. In general, these commitments emphasised mitigating energy use, with minimal focus on emissions (e.g., methane) from animal and land use, which make the biggest warming contributions in the agricultural sector. We also compare the companies’ projected global emissions under a business-as-usual scenario to their headquarter countries’ future emissions, assuming each country’s compliance with their commitments to the Paris Climate Agreement. Taking this view of responsibility and emissions accounting (which is not the conception of responsibility in the Paris Agreement), our results show that including industrial meat and dairy producers’ full global emissions in national accounting would impact national targets for greenhouse gas reductions. As examples, by our calculations, two companies—Fonterra in New Zealand, and Nestlé in Switzerland—would make up more than 100% of their headquarter country’s total emissions target in the coming decade. Finally, we evaluated using 20 yes-or-no questions and a variety of sources the transparency of emissions reporting, mitigation commitments, and influence on public opinion and politics of the 10 US meat and dairy companies. According to the evidence we collected, all 10 US companies have contributed to efforts to undermine climate-related policies. Each of these analyses approaches responsibility in new and different ways. Under the swiftly changing social conditions provoked by climate change, we can expect new imaginings of responsibility for GHG emissions, as well as increased attention to the role of corporate actors and their accountability for climate change impacts. 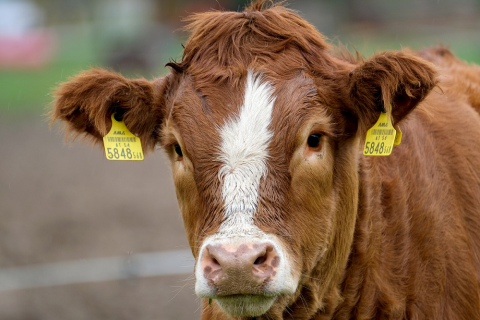