This paper takes as its starting point the mainstream projections that in future, global food production will need to increase by another 60–110% by 2050, to keep up with anticipated increases in human population and changes in diet (it should be noted, however, that the need and feasibility of such increases is contested (see), with many arguing that dietary change and waste reduction can reduce the need for production increases (see)).

Increases of this magnitude are theoretically possible through aggressive intensification in areas where crop yields are currently far below their maximum theoretical potential. But the degree to which such levels of intensification are actually possible, is limited by a range of factors including resource availability, environmental impacts, and the effects of future climate change on crop yields.

This study focuses on the latter and finds that climate change is likely to substantially decrease the potential for further intensification on current agricultural land for three major global cereal crops (wheat, maize, and rice), although the total global land area that is potentially climatically suitable for these crops remains largely unchanged - only spatially redistributed. In the absence of successfully breeding new crop cultivars to suit warmer climates, future increases in production will likely need to come from altering crop choice and furthermore, the location of cropland itself, to best take advantage of changes in maximum-attainable yields resulting from climate change.

As shown in the graph above, the study’s findings project that large areas of current cropland will experience strong reductions in maximum attainable yields of major cereal crops over the next century. This indicates that for crops grown where and as they are today, climate change will bring persistent vulnerability, unless technological change is able to help adapt crops and farming systems to new conditions

Vulnerable areas in the study were defined as those showing a reduction in attainable yield  greater that 10% relative to present-day reference data. The results indicate that already by mid-century 43%, 28% and 40% of current global harvested area for wheat, maize and rice, respectively, are located in regions where yields are vulnerable to climate change (see Table below).

The authors highlight that increasing production through global changes in agricultural practices and land use will not be straightforward, and will likely present a major land-use, trade, social and economic dilemmas over the coming decades, accompanied with the need for technology transfer. The large scale changes in land-use that would result from relocating agricultural production, could also undermine goals to protect biodiversity and ecosystem services. Additionally, the results provide further confirmation of the vulnerability of future cereal crop yields to climate, and to the need to develop new technologies, management techniques, and crops, that can reduce this vulnerability.

To arrive at these conclusions, a climate analogues approach was used. The approach uses current data on maximum-attainable yields for crops in different climatic regions, combined with data of future climatic change, to identify regions whose climatic conditions today can serve as analogues for future warming in other regions.

Analogues were identified for mid-century (2041–2059) and end-of-century (2081–2099) and were defined based on the accumulated annual sums of growing-degree-days (GDD) and precipitation. The assumption behind this method, is that a yield that can be attained today can also be attained in the future, under an analogous climate, but at a different location. It should be noted, that the climate scenario chosen (representative concentration pathway 8.5: broadly speaking a business as usual emissions scenario) represents a very high level of warming by the end of the century.

One of the benefits of the climate analogues methods is that the results are arrived at independently from other methods that use crop modelling - although they both share a dependency on soil suitability information as a data input. Other benefits of the method include being able to assess the change in attainable crop yield across the current global cropland area for each of maize, wheat and rice; the ability to Identify areas where current dominant crops are likely to no longer be suitable in future; and also to explore potential new growth locations for these crops.

However it is important to recognise that this method also has many limitations. For example, a climate analogues approach only considers climate-induced changes in yield, and does not factor in any yields gains resulting from enhanced photosynthesis in some crop types, as a result of elevated atmospheric CO2 levels (although recent research shows these benefits may be smaller than originally thought). Moreover, factors affecting agricultural managements ability to maximise yields are assumed to be transferable between locations, for example the quality of the soil.

These do not, however, detract from the overall finding, that future climate change will limit attainable yields for maize, wheat, and rice on current cropland, thereby limiting the ability of agricultural intensification to increase production levels, unless agricultural crops are changed to those more climatically suited to future conditions, and agricultural production is relocated to areas that will be climatically favourable.

Climate change could pose a major challenge to efforts towards strongly increase food production over the coming decades. However, model simulations of future climate-impacts on crop yields differ substantially in the magnitude and even direction of the projected change. Combining observations of current maximum-attainable yield with climate analogues, we provide a complementary method of assessing the effect of climate change on crop yields. Strong reductions in attainable yields of major cereal crops are found across a large fraction of current cropland by 2050. These areas are vulnerable to climate change and have greatly reduced opportunity for agricultural intensification. However, the total land area, including regions not currently used for crops, climatically suitable for high attainable yields of maize, wheat and rice is similar by 2050 to the present-day. Large shifts in land-use patterns and crop choice will likely be necessary to sustain production growth rates and keep pace with demand.

You can read related research by browsing the following categories of our research library: Primary production: Agriculture; Climate change: Impacts and adaptation; Food security and nutrition; 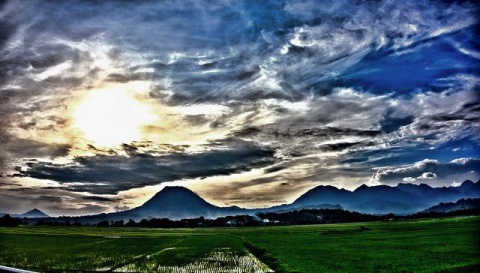