In his article in The Economist, it is argued that China’s insatiable appetite for pork is not only a symbol of the country’s rise, but also a danger to the world from a sustainability perspective. The article discusses the history of pork consumption in China, its cultural and economic importance as well as how it impacts land use and large scale land acquisitions abroad.

From a sustainability perspective, the article notes that each kilogram of pork requires 6kg of feed, usually processed soy or corn. Due to scarcity of water and land it will be difficult to feed both pigs and people in China which is why Chinese swine today, which previously ate household scraps, increasingly rely on imported feed.

More than half of the world’s feed crops will soon be eaten by Chinese pigs says Mindi Schneider of the International Institute of Social Studies in The Hague to The Economist. In 2010 China’s soy imports accounted for more than 50% of the total global soy market. As a result of Chinese consumption, The Economist writes that “land use is changing drastically on the other side of the world. In Brazil, more than 25m hectares of land—parts of which were once Amazon rainforest—are being used to cultivate soy (Chinese companies have not signed up to the “soy roundtable”, a voluntary association, the members of which agree not to buy soyabeans from newly deforested land).” 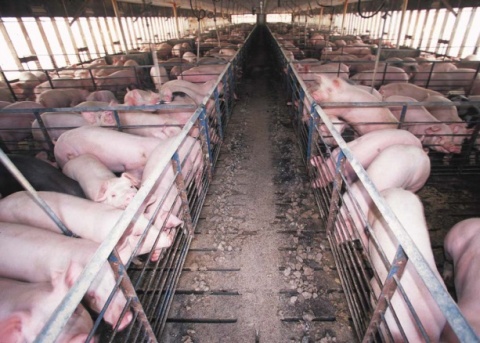