Reducing global meat consumption will be critical to keeping global warming below the ‘danger level’ of two degrees Celsius, the main goal of the 2015 climate negotiations in Paris, according to this new report by Chatham House.

The report 'Changing Climate, Changing Diets: Pathways to Lower Meat Consumption' focuses on global meat consumption and on ways of changing diets to reduce overconsumption. It calculates that cutting meat consumption to the level recommended by health bodies could generate a quarter of the remaining emissions reductions needed to keep global warming below 2 degrees Celsius.

Evidence shows that global meat consumption is already above healthy levels and predictions indicate that it will rise a further 76 per cent by 2050.  Such consumption trends are incompatible with the objective of avoiding dangerous climate change.

The report describes the social and environmental costs of overconsumption of meat as significant, including a growing non-communicable disease burden, obesity, and depletion of natural resources.  Public awareness of the issue is shown to be low however, and meat remains off the policy agenda.

The Chatham House team behind the report argue that measures to make meat more expensive, such as a carbon tax, would face less resistance if people were better informed and understood the negative impacts of meat consumption.  They write: “Publics respond best to simple messages. Efforts must be made to develop meaningful, accessible and impactful messaging around the need for dietary change.”

The report describes how governments are “stuck in a cycle of inertia, fearing the repercussions of intervention”. The results of innovative new research, which included a 12-country public survey and focus groups in Brazil, China, the UK, and the US, leads the authors to conclude that government fears are exaggerated and that once aware of the link between meat and climate change, consumers accept the need for government action.

The report authors argue that governments must lead in shifting attitudes and behaviours and create comprehensive strategies to shift diets. This includes making it cheaper and easier to eat healthily and sustainably for example by implementing policies on labelling, public procurement, regulation and pricing.

Further coverage of this report can be found here.  For related work by FCRN and Chatham House see their joint report “Policies and actions to shift eating patterns: what works? A review of the evidence of the effectiveness of interventions aimed at shifting diets in more sustainable and healthy directions”. 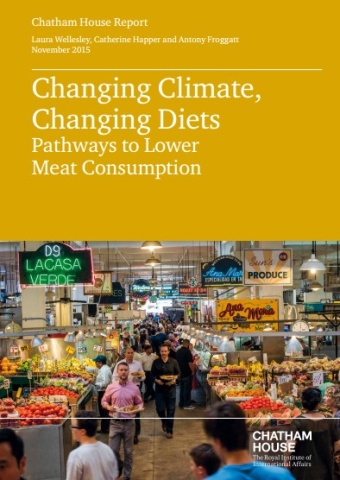