The paper assumes that future climate change proceeds according to the RCP8.5 scenario, where there is an increasing global population, slow economic growth, high greenhouse gas emissions from coal use, and an atmospheric CO2 concentration of 936 ppm by 2100 (levels are 410 ppm as of November 2019, the time of writing).

The types of farming that would be viable would change differently across the UK. Currently, the south-east of the UK is predominantly farmed as arable land, while the west and north, being cooler and wetter, are used as grassland to rear livestock.

Under unmitigated climate change, arable land would advance to the west because of the hotter and drier growing season, but some existing arable land would become too dry to grow crops and could change to grassland. However, if additional irrigation were to be supplied to farms in the south east, arable areas in the south east could be preserved. The authors note that predicted water demand for irrigation (~200 mm per growing season) is large compared to annual runoff (which indicates water availability) in the south east (200-400 mm).

The impact of climate change on vegetation including agricultural production has been the focus of many studies. Climate change is expected to have heterogeneous effects across locations globally, and the diversity of land uses characterising Great Britain (GB) presents a unique opportunity to test methods for assessing climate change effects and impacts. GB is a relatively cool and damp country, hence, the warmer and generally drier growing season conditions projected for the future are expected to increase arable production. Here we use state-of-the-art, kilometre-scale climate change scenarios to drive a land surface model (JULES; Joint UK Land Environment Simulator) and an ECOnometric AGricultural land use model (ECO-AG). Under unmitigated climate change, by the end of the century, the growing season in GB is projected to get >5 °C warmer and 140 mm drier on average. Rising levels of atmospheric CO2 are predicted to counteract the generally negative impacts of climate change on vegetation productivity in JULES. Given sufficient precipitation, warming favours higher value arable production over grassland agriculture, causing a predicted westward expansion of arable farming in ECO-AG. However, drying in the East and Southeast, without any CO2 fertilisation effect, is severe enough to cause a predicted reversion from arable to grassland farming. Irrigation, if implemented, could maintain this land in arable production. However, the predicted irrigation demand of ~200 mm (per growing season) in many locations is comparable to annual predicted runoff, potentially demanding large-scale redistribution of water between seasons and/or across the country. The strength of the CO2 fertilisation effect emerges as a crucial uncertainty in projecting the impact of climate change on GB vegetation, especially farming land-use decisions. 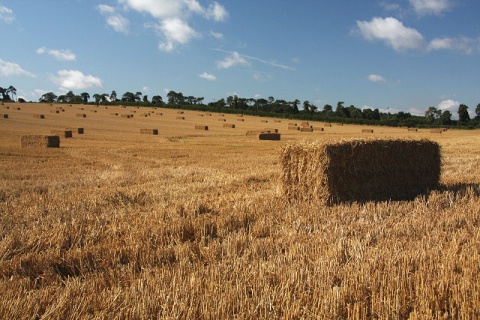