Carbon footprint and nutrition of self-selected US diets

FCRN member Diego Rose has written a paper on the links between dietary choices in the United States (based on real dietary data), environmental impacts, and nutrition quality, finding that the diets with the lowest greenhouse gas emissions per calorie generally scored better on the US Healthy Eating Index.

To obtain the dietary data, participants were asked to recall what they had eaten in the last 24 hours, aided by items such as glasses and measuring spoons to help participants estimate portion sizes.

Greenhouse gas emissions data for production and (in some cases) primary processing were gathered via a literature survey. The emissions data for different food types will become available soon here. The diets of each participant were ranked according to greenhouse gas emissions per 1000 kcal. The figure below shows the distribution of emissions, with the average emissions intensity being 2.21 kg CO2 eq. per 1000 kcal and the average overall dietary emissions per day being 4.72 kg CO2 eq. per person per day. A substantial portion of greenhouse gas emissions (GHGE) has been attributed to the food sector, but little is known about the association between the carbon footprint of individual self-selected diets in the United States and nutritional quality.

The aims of this study were to assess the GHGE from individual self-selected diets in the United States and examine their association with nutritional quality of the diets, demographic patterns, and food-related behaviours.

The dietary GHGE from US adults (>18 y, N = 16,800) in the 2005–2010 National Health and Nutrition Examination Survey (NHANES) were calculated by linking all foods consumed in their 24-h recall diets to our new database of food environmental impacts. Diets were ranked by GHGE/1000 kcal. Those in the top and bottom quintiles were compared on the US Healthy Eating Index (HEI) and on the amounts of specific nutrients known to be under- or overconsumed in the US population. Demographic and behavioural variables from the NHANES were also correlated to these dietary carbon footprints.

Diets in the bottom quintile accounted for one-fifth the total emissions (GHGE/1000 kcal) of those in the top quintile, yet had significantly higher (P < 0.001) HEI scores by 2.3 ± 0.7 points on a 100-point scale. These low-GHGE diets contained higher amounts of fiber and vitamin E and lower amounts of sodium and saturated fats, whereas high-GHGE diets contained higher amounts of vitamins A and D, choline, calcium, iron, and potassium. Low-GHGE diets had less meat, dairy, and solid fats, and more poultry, plant protein foods, oils, whole and refined grains, and added sugars.

Food patterns responsible for lower GHGE had a better overall diet quality and were more nutritious on several key dimensions, although not all. These results can inform dietary guidance and other policies that seek to address the goals of improved dietary intakes and reduced food-related emissions.

Read the full paper here. See also the Foodsource chapter What is a healthy sustainable eating pattern? and the paper Greenhouse gas emissions and energy use associated with production of individual self-selected US diets. 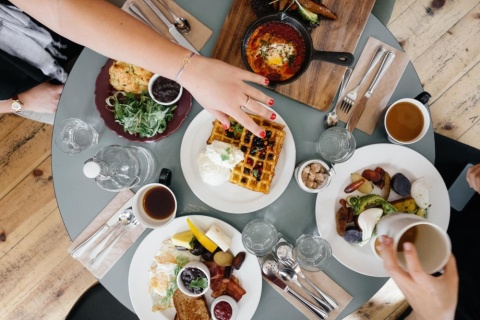