Managing tropical forest conservation on the basis of maximising carbon storage might not protect the most biodiverse regions of forest, according to a recent paper. Using datasets from Brazil, the authors found that the correlation between biodiversity and levels of carbon stored in forests depended on whether and how the forest had been disturbed by human activity.

The paper finds that accepting a slightly lower level of carbon storage could, in some conservation schemes, have a disproportionately positive effect on biodiversity levels - mainly in relatively undisturbed forests.

As one of Earth’s most carbon-dense regions, tropical forests are central to climate change mitigation efforts. Their unparalleled species richness also makes them vital for safeguarding biodiversity. However, because research has not been conducted at management-relevant scales and has often not accounted for forest disturbance, the biodiversity implications of carbon conservation strategies remain poorly understood. We investigated tropical carbon–biodiversity relationships and trade-offs along a forest-disturbance gradient, using detailed and extensive carbon and biodiversity datasets. Biodiversity was positively associated with carbon in secondary and highly disturbed primary forests. Positive carbon–biodiversity relationships dissipated at around 100 MgC ha–1, meaning that in less disturbed forests more carbon did not equal more biodiversity. Simulated carbon conservation schemes therefore failed to protect many species in the most species-rich forests. These biodiversity shortfalls were sensitive to opportunity costs and could be decreased for small carbon penalties. To ensure that the most ecologically valuable forests are protected, biodiversity needs to be incorporated into carbon conservation planning.

Read the full paper here. See also the Foodsource resource How do food systems affect land-use and biodiversity? and our coverage of the paper Carbon impacts of palm oil and rubber plantations. 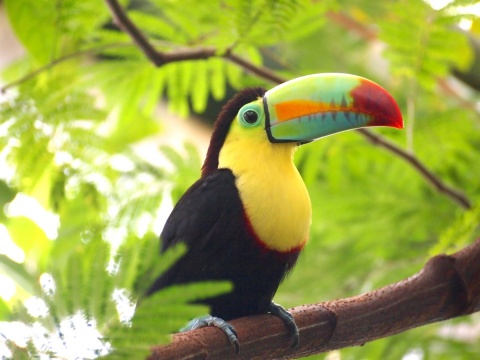