Carbon, farming and biodiversity among afforestation programs in Europe

These two studies discuss afforestation projects in relation to 1) land availability and sheep farming in Scotland, and 2) the biodiversity losses that may be associated with such projects.

The first study evaluates the options Scotland has for expanding woodland for carbon storage purposes with limited impact on livestock income for farmers. Woodland expansion targets in Scotland means that in addition to the 17 % of the nation which is covered with woodland, an additional 10,000 hectares of new woodland per year for the period 2012–2022 are proposed to be established. The land available in Scotland for such woodland expansion is limited. The most suitable land for forest planting is land that is also most suitable for holding sheep. The authors show through a case study that agricultural output and carbon sequestration can be combined on the same piece of land through the practice of silvopasture: integrating trees and pasture in the same area. They note the need for subsidies in the first years following planting, but that financial returns of woodland management would become self-sufficient in later years.

The second article on the subject of afforestation questions the common assumption that planting trees on grassland not only sequesters carbon but also benefits biodiversity. It argues that many European grasslands managed at low intensity contribute significantly to biodiversity conservation. They note a considerable mismatch between different EU programs directed at improving 1) carbon storage, 2) farm productivity, 3) biodiversity protection. See figure below.

Afforestation projects are viewed as potentially effective measures for carbon sequestration and therefore climate change mitigation. Increasing demands for bioenergy products also require land for woodland plantations. Much of the land in temperate regions suitable for afforestation is used for agriculture and consequently afforestation of farmland is frequently proposed. Land owners are commonly reluctant to sacrifice fertile land for purposes other than food and feed production. In Scotland’s uplands, grazed pastures are a common land use that could be put under pressure by demands for woodland planting. This chapter explores how farm woodland planting for carbon sequestration and biofuel production affects livestock output. Sheep productivity, soil carbon and tree biomass data from a hill farm in Aberdeenshire, Scotland, are used to estimate the carbon balance and agricultural output of farm woodland plots and silvopastoral systems. The conceptual ideas of trade-off curves are illustrated with the example of ‘trees versus sheep’. Planting trees on pasture land can have varying impact on sheep depending on density and planting system. Within the concepts of trade-offs and synergies, it is furthermore discussed whether agroforestry systems such as silvopasture can ameliorate trade-offs between woodland and agriculture by enhancing agricultural productivity while also providing carbon benefits. The concepts presented show that there is great potential for integrating agriculture and forestry to achieve environmental benefits without compromising productivity.

The extension of forest area is a globally accepted tool to offset CO2 emissions from deforestation and the combustion of fossil fuels. The common assumption is that in addition to the perceived climate benefits increasing forest area will also support biodiversity, thus making afforestation a “win-win scenario”. Based on the existing scientific evidences, we show that joined climate and biodiversity benefits are strongly context-dependent and that the outcome of afforestation is often highly questionable. In Europe, grasslands managed at low intensity contribute substantially to biodiversity conservation and carbon storage. However, many of these grasslands have been lost due to abandonment and subsequent spontaneous succession towards woody vegetation, or due to land use intensification. Moreover, grasslands are the ecosystems most often deliberately afforested in the context of EU carbon-centered policies that may thus counteract biodiversity conservation programmes. By reviewing the main EU policies targeting forests and grasslands, we found a striking ambivalence between policies and funding schemes addressing grassland conservation on the one hand (e.g. Habitats Directive, green payments within the Common Agricultural Policy) and those supporting afforestation on the other (e.g. rural development funds). We suggest three measures towards a better harmonization of the European Union policies that target forest and grassland ecosystems: (1) promoting the alignment of the decisions taken across different policy sectors; (2) focusing on the whole range of ecosystem services and biodiversity issues rather than on carbon management only; (3) valuing systems managed at low-intensity for their multifunctionality.

To find the journal articles, look here (paywall) and here (paywall). For a strongly argued plea against sheep farming on hills in the Uk, see George Monbiot’s article on the topic. 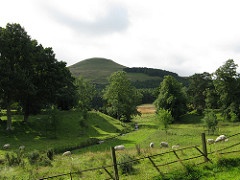