This paper compares the carbon footprint of broiler meat production in Europe with two uses of insect protein: either as chicken feed (in the place of soybean meal), or as food for direct consumption by humans. There is high variation in performance between insect species. On average, the carbon footprint per kg of protein produced for human consumption is lowest in the case of consuming insect protein directly as food, where the insects are fed on low-value industrial side streams. Replacing soybean meal chicken feed with insects can increase the carbon footprint, especially if the insects are fed on industrially produced composite feed as opposed to a waste stream.

Since the data on insect performance come from various other studies, the exact composition of industrial side streams and industrially produced composite feed depends on the data source. This partly explains the high variation of results.

The figure below summarises the results of the paper: Image: Range of carbon footprint values per kg of protein food produced for humans. The range illustrates the minimum and maximum values for each scenario (which depend on insect type); the mean value for each scenario is illustrated by the horizontal dash. Figure produced by TABLE using data from Table 6 of Vauterin et al.

As part of the current climate change debate, concerns have been raised over the rapid expansion of soybean cultivation as the major protein source to feed animals for human consumption. At the same time, insect-based protein is rapidly emerging as an alternative protein source to animal-based protein, both as a potential substitute for soybean-based protein for the use in animal feed, and for direct human consumption. The assessment of climate impacts and market potentials of novel animal feed and food products related to such insect-based protein requires an assessment of their carbon footprints. This paper explores the extent to which insect protein could help to reduce the Global Warming Potential (GWP) associated with food consumption in Europe. The results from a quantitative review and scenario analyses provide two key insights. First, they support previous research suggesting that insect protein has the greatest potential to reduce the carbon footprints of European consumers, if insects are directly consumed as food. Second, they suggest not only that the use of insects as animal feed can substantially contribute to the sustainability of broiler production systems with regard to lowering GWP, but also that low-value side streams are key for improving this potential.

Vauterin, A., Steiner, B., Sillman, J. and Kahiluoto, H., 2021. The potential of insect protein to reduce food-based carbon footprints in Europe: The case of broiler meat production. Journal of Cleaner Production, p.128799.

Read the full paper here. See also the TABLE explainer How can we reduce food-related greenhouse gas emissions? and the blog post Improving the environmental sustainability of insect farming. 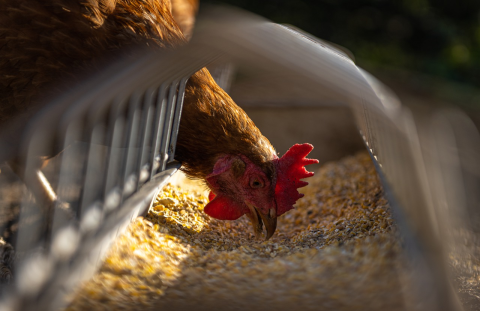