Appetite for Change provides a detailed and integrative analysis of the dramatic changes in China’s food system over the last 35 years, and explores the linkages among the environmental, health, economic and cultural trends that are emerging.

The major changes include:

The report underlines the point that there is no one ‘food system’ in China, but rather a diversity of ‘food systems.’  Smallholder agriculture and traditional wet markets coexist with large-scale industrialised production and a burgeoning supermarket sector; China’s appetite for eating out embraces a broad range of catering formats and food types. There are also substantial variations by region, between rural and urban areas and by socio-economic status.

Rapid changes in the food system have had major consequences for the environment, for society and for people’s health, presenting multiple challenges for policy makers. Alongside a significant decline in hunger and malnutrition, and improved access by more people than ever before to affordable, diverse and enjoyable food, key challenges for policy makers include addressing environmental pollution and degradation, food safety concerns and the rising prevalence of obesity and chronic diseases. These problems are connected, and while addressing some issues may bring multiple benefits, there are also trade offs that need to be managed.  In a country as large, diverse and rapidly transforming as China, this requires both interconnected but also differentiated policies that are sensitive to social, economic and environmental contexts and scales. The report examines the issues that policy makers face, highlights actions that are being taken to address them – and the challenges in doing so – and identifies opportunities for international collaboration.

Many of the issues that China faces are shared by other rapidly industrialising and developed countries.  In China, as in the UK, livestock production and consumption represent a nodal point where multiple environmental, health and ethical issues intersect.  Strategies to moderate meat consumption could potentially help address both the problems of obesity and other chronic diseases and the environmental impacts of livestock production.  Given the shared nature of these problems, much could be gained from international collaboration in these and other areas.

Appetite for Change was produced with the support of the Department for the Environment, Food and Rural Affairs, the Department for Business, Innovation and Skills, the Rockefeller Brothers Fund and the World Society for the Protection of Animals.  We are grateful for their support.

Dr Tara Garnett runs the Food Climate Research Network (FCRN) at the University of Oxford’s Environmental Change Institute. The FCRN was set up to undertake research into food systems, climate change and the interface with other social and environmental concerns; and to communicate and broker knowledge on these issues to a growing network of members who together span diverse sectors, disciplines and interests.  The FCRN is funded by the CGIAR Research Program on Climate Change, Agriculture and Food Security (CCAFS) and the Oxford Martin Programme on the Future of Food. Email: taragarnett@fcrn.org.uk tel: 020 7686 2687.

Dr Andreas Wilkes has worked in agriculture and natural resources management in China since the 1990s. He is director of Values for Development, a UK-based consulting company focusing on climate change adaptation and mitigation in agriculture in developing countries, and supporting the development of international collaboration with China in the agriculture sector. Email: a.wilkes@valuesfd.com 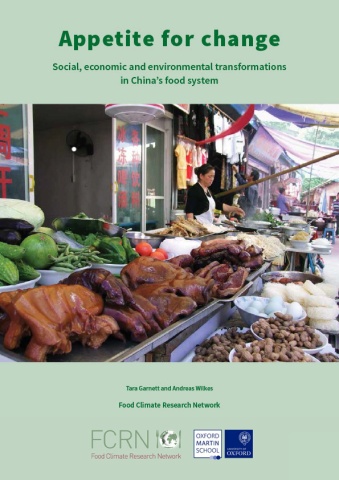